END_OF_DOCUMENT_TOKEN_TO_BE_REPLACED

BMC British Bouldering Championships round up

The Climbing Works played host to this year’s BMC British Bouldering Championships – with the UK’s best boulderers travelling from far and wide to compete. Familiar faces came to defend their places in the Senior GB Bouldering Team but they were up against stiff competition from many young pretenders. The most notable absence was Shauna Coxsey, the defending women’s champion, who was continuing her campaign for international glory at the IFSC World Cup in Haiyang, China. However, both the women’s and men’s competitions were fiercely contested by a strong field of psyched and well-prepared climbers.

As with previous years, the BBCs followed the international format over two days – the qualification round taking place on Saturday, June 21st, followed by the semi-final and final on Sunday, June 22nd. Played out on the Climbing Works’ competition wall, one by one the competitors would attempt each boulder problem in an effort to progress to the next round, given four minutes and a whole lot of encouragement from the crowd to try to reach the top.

The men’s qualification round saw two complete all five boulder problems – Dave Barrans showing his pedigree as defending champion with five flashes, and Jon Partridge hot on his heels taking a few more goes to complete the set. The minimum number of sends needed to reach the semi-final would ultimately prove to be two, taking a maximum of seven tries. Meanwhile, in the women’s competition, there were five who completed all five boulder problems, with only the number of tries separating them. Coming top of the group, Junior GB Bouldering Team member Tara Hayes showed poise by flashing all five qualifiers. Both Leah Crane and Michaela Tracy took just one extra attempt, followed by Diane Merrick with nine attempts and Charlotte Garden with 11. In the end, tickets to compete in the women’s semi-final were sold at a price of just one send – whittling the group down to the top 20. 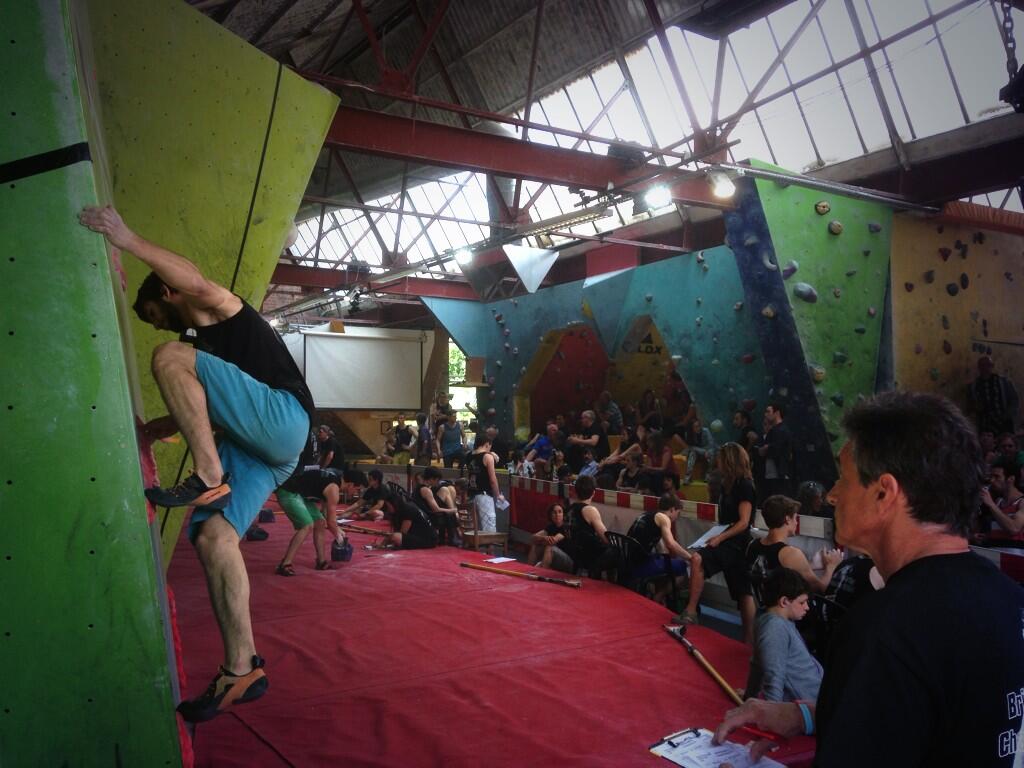 Mens qualifications underway and watched by a good crowd

With a night’s rest behind them, the competitors came back fresh and ready to take part in the semi-final the next day. Starting at 10:30am, walking out to DJ Sam Whittaker’s tunes in front of a large crowd would be enough to wake anyone from residual sleepiness. It was game on for the 40 men and women vying for the title. Four blocs stood in their way and they would have to overcome as many as possible, in as few tries as possible, if they wanted to contend the crown. Only six men and six women would progress.

Going into the semis in first place, Dave Barrans once again dominated, being the only competitor to complete all four blocs, and taking only seven attempts to do so. He would be joined by Ben West, with three tops. The remaining finalists scraped through on the number of attempts, with six competitors all ascending two boulder problems. If you didn’t climb them in five tries or less, you weren’t going through. Joining Barrans and West in the final would be Dominic Burns, Jon Partridge, Max Ayrton and Matthew Cousins. 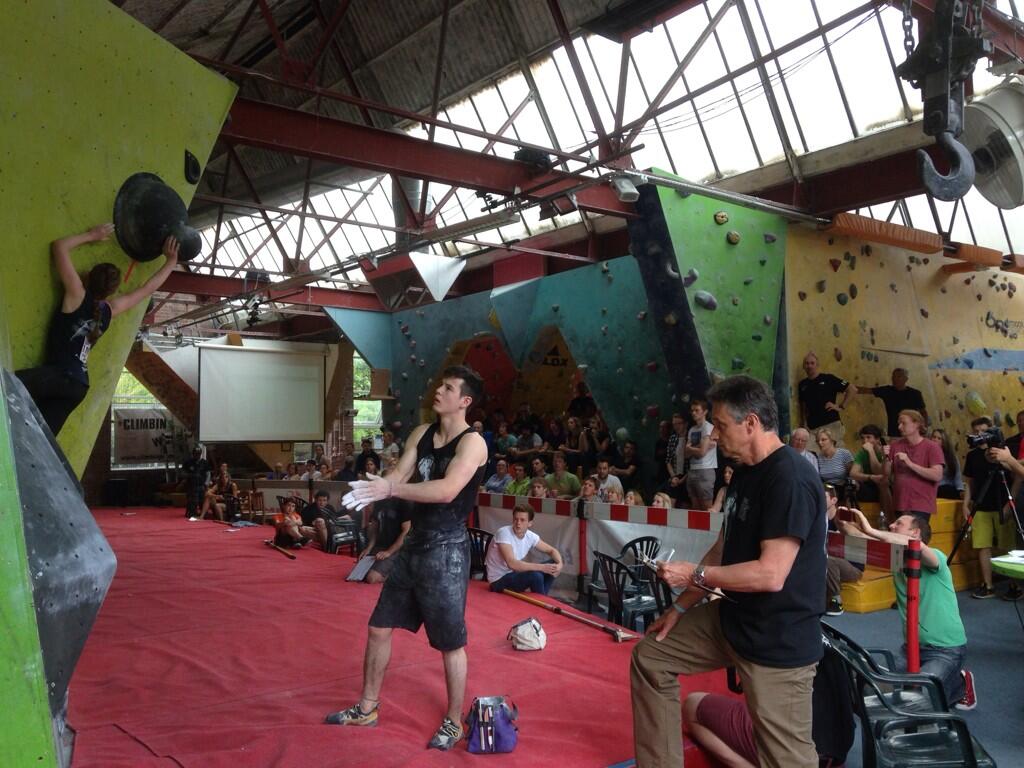 The women’s semis was equally as tight, with the exception of first place, taken by an on-form and in-the-zone Michaela Tracy, as she possessed the only scorecard with four ticks. The next four finalists all completed three blocs, with only bonus holds and attempts separating them. Charlotte Garden took five attempts, while Tara Hayes, Leah Crane and Xiao Xian Goh all took seven. Bringing up the rear in sixth place was Diane Merrick, just outperforming Gracie Martin and Jennifer Wood, former GB Junior Team colleagues, who took five attempts each to complete two blocs, three attempts shy of Diane’s efforts. 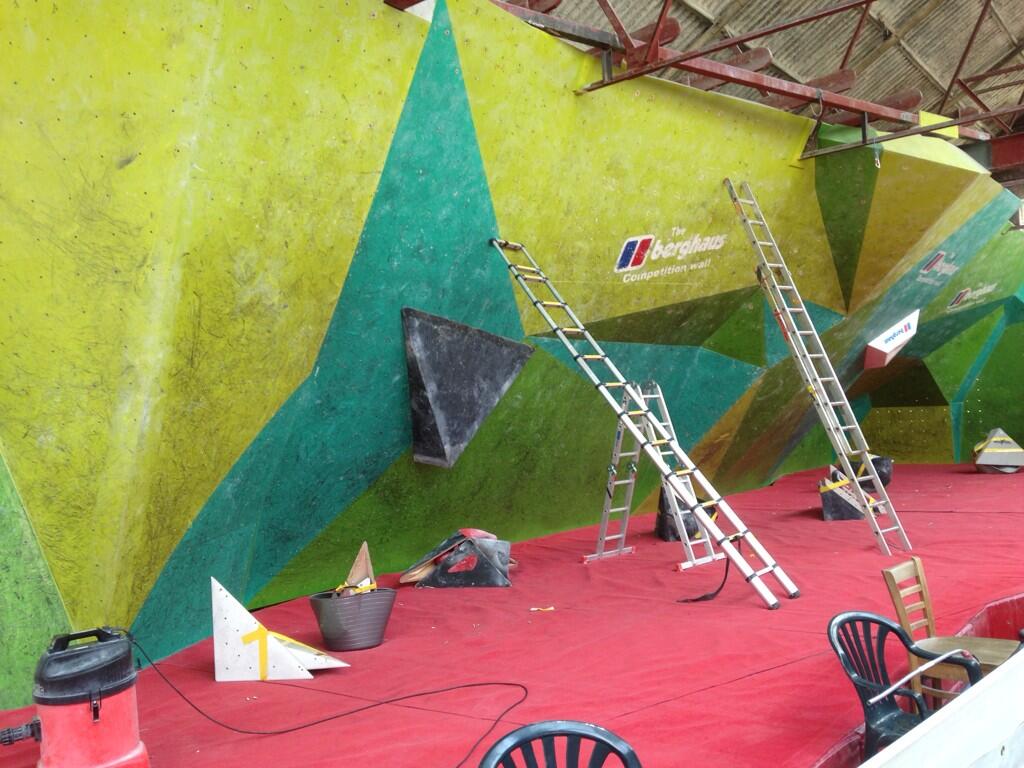 Blank canvas for the route setters to set the finals on

Wiping the slate clean (ignoring any necessary countbacks), it was time for the final. If there was one thing true of all the finalists, it was the effort they had put in to reach this stage. Not just on the day in question either, but the effort put into their training; the hours spent working on their conditioning, finger strength, flexibility, power and technique. All of this would need to come together if they were going to be crowned British Bouldering Champion. 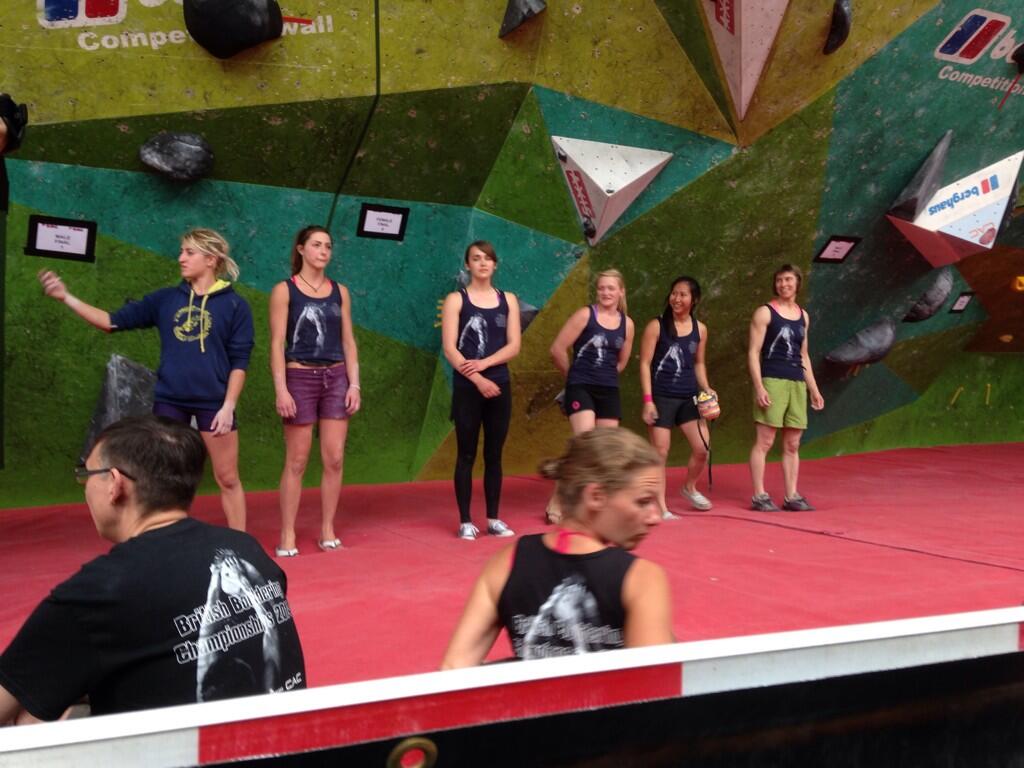 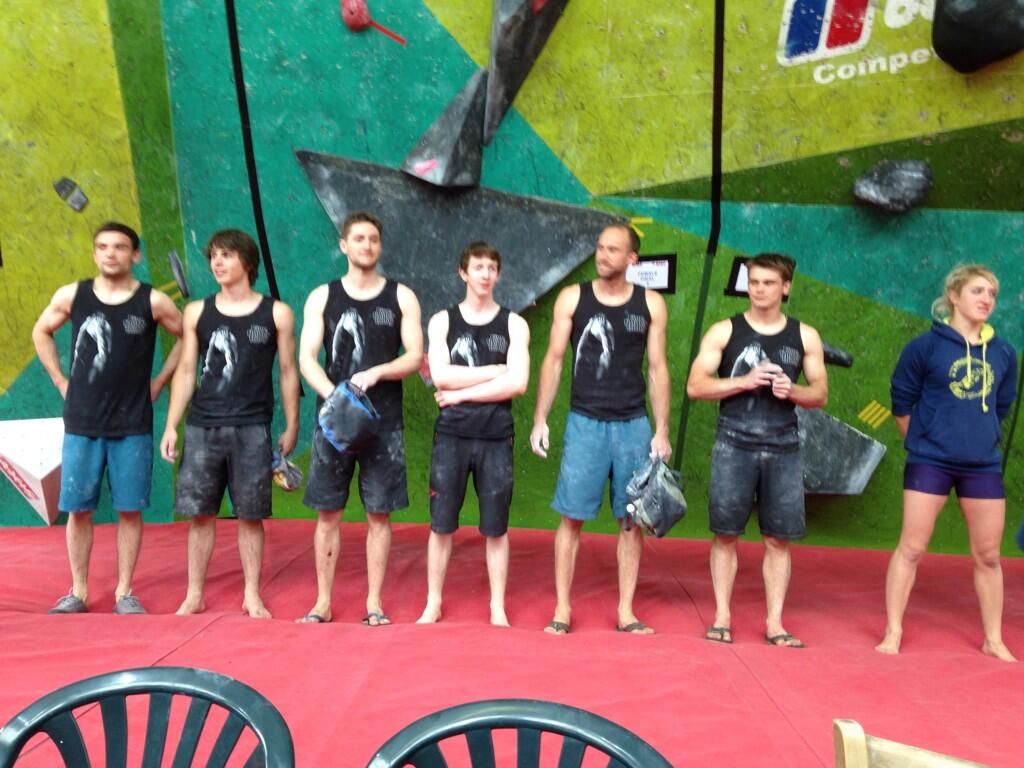 First to take centre stage for the women was Diane Merrick, faced with a technical slab climb that started with all four points on a single, vertical tufa. A little bridging and shuffling would get you stood atop this tufa and its identical neighbour, when a large, rounded volume came into reach. The next move was largely height dependent, unfortunately, meaning some of the competitors simply couldn't reach the following volume, the penultimate hold, before a relatively easy finish. Only Tara Hayes, who flashed the problem, and Michaela Tracy, who got it on her second go, managed to find the top. A little further along the competition wall, the men were having an equally difficult time of it on a hugely powerful undercut move. All the competitors got into the required position at least once, but it seems the ability to stand up and catch the next volume above was reserved for Dave Barrans, who flashed the problem with apparent ease. 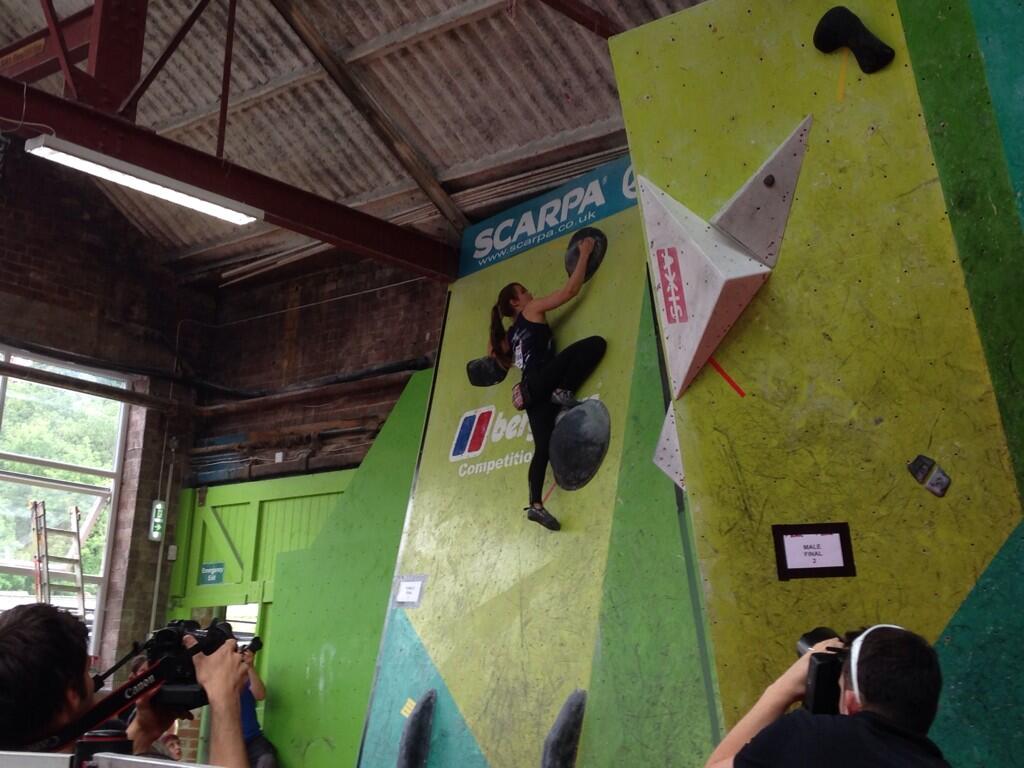 Onto problem two, the women took it in turns to try to climb out of the steepest section of the wall, using a couple of decent yellow jugs to throw for a large tear drop volume. Valiant efforts to make the move less powerful with funky heel-hook beta were attempted, but in the end only Tracy had the necessary power to catch the volume and swing her feet back on. She preceded to work her way through two more identical volumes, using a series of toe hooks to keep herself on the wall, before a cut loose generated too much outswing to hold two slopers. Tracy's highpoint, falling on the last move, was unmatched and no one managed to finish. The men were all having a tricky time of it trying to dyno to two wooden volumes off a crimpy gaston, the trick being trying to hold on after you hit them. The first to latch the move was the third man out, Jon Partridge, but he failed to capitalise and dropped the top section. No one else was able to do the move, except that is for Barrans, who did not repeat Partridge's mistake, making it 2-nil. It was now Barrans' title to lose.

It was the men's turn to take on a slab on the far right of the wall for problem three, while the women had a slightly overhanging techy boulder utilising several pinches. The technical nature of the women's problem thwarted many attempts to get much further than the starting block for several competitors. Eventually, Hayes, the fourth to try it, got all the way to the final move before sliding off and hitting the mat without topping. The occasional bonus hold was reached by the others but it wasn't until Tracy came out that the final hold was matched - she was on fire, dominating on all three problems so far. In the men's camp, a few were having trouble getting their rubber to stick to the large volume in the middle of the slab but several made the top before time out - Partridge in particular left it until the very last second to complete the bloc. Matthew Cousins, Dominic Burns and Dave Barrans also showed off their technical abilities to reach the top relatively quickly. Of course, Barrans was now the only competitor to have three tops and, therefore, headed to problem four having already retained his crown for yet another year. 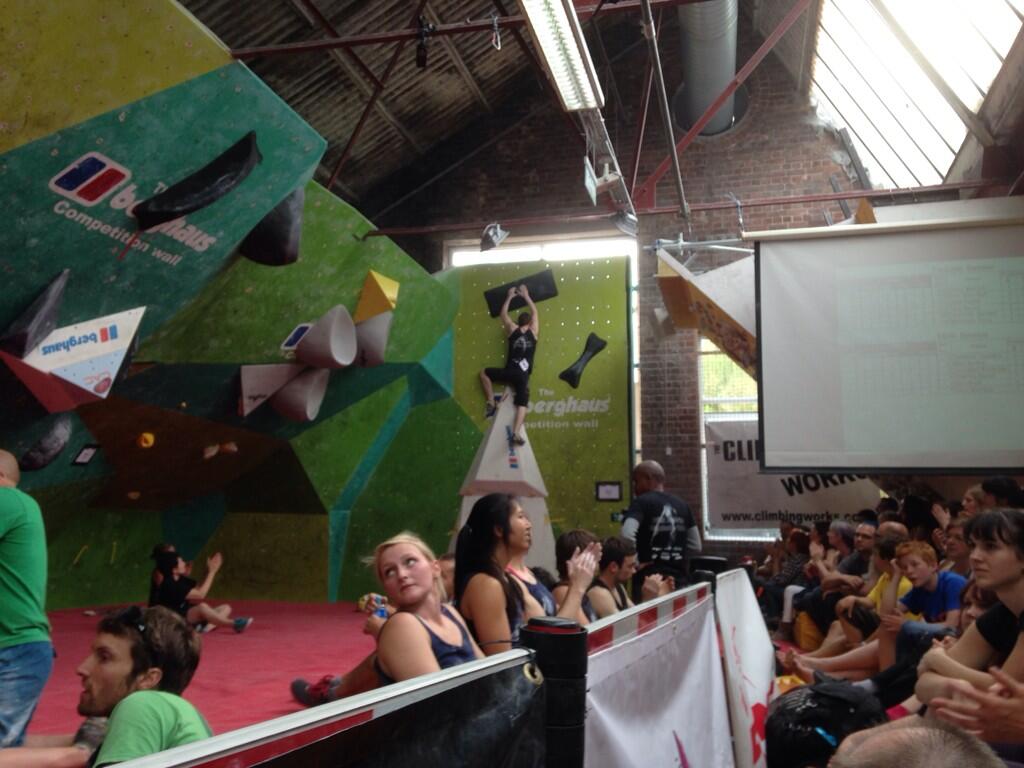 Come the final round and problem four would prove a veritable feast of action. Once again, the women had to start with all four points in contact with a single volume, before navigating yet more volumes to reach a crimpy side-pull and a pinch, when a lunge for the final jug would yield victory. Diane Merrick, Xiao Xian Goh and Leah Crane all made it through to the last move but couldn't latch the final hold, while Tara Hayes struggled to reach the bonus hold half way up. Charlotte Garden, who looked strong on all the problems, finished in emphatic fashion with a flash, bumping her straight into second position. Leading the pack from the beginning, Michaela Tracy didn't disappoint and followed suit with a flash of her own, taking the title of British Bouldering Champion 2014. The men's problem started with a tricky throw and jump to a positive, thin volume before reaching up high for a huge tufa. A final lunge would secure a tear drop volume but the crux came with matching it. The majority of the competitors dropped the match on the final hold before completing it next go, with Dominic Burns the only one unable to finish. 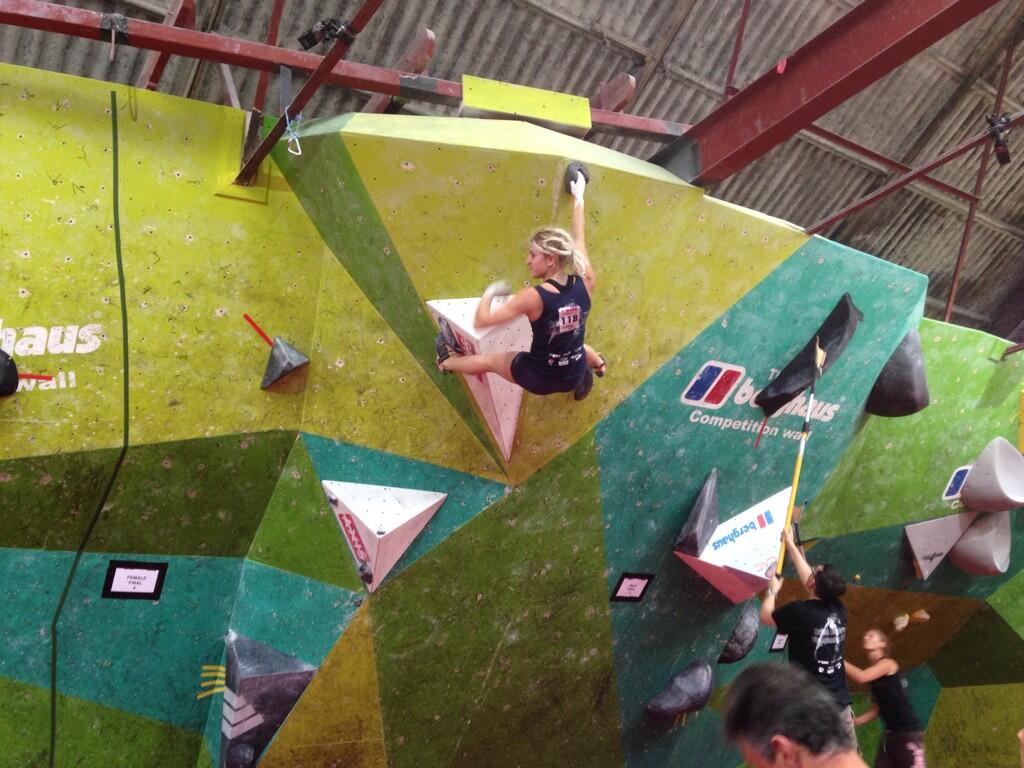 It was obvious to everyone watching who the winners were, as Tracy and Barrans had dominated throughout and were deserved champions. In second place was Matthew Cousins and Charlotte Garden and in third came Jon Partridge and Tara Hayes, wrapping up a fantastic competition. All that was left was to say thanks to the competition partners and sponsors, the BMC, Entreprises, Climbers Against Cancer and, of course, The Climbing Works.