END_OF_DOCUMENT_TOKEN_TO_BE_REPLACED

It's always difficult to look back at your own event and describe accurately what happened. Basically because you're running around so much that you're not sure how everything is going. We got CWIF competitor Sam Schofield to write us his views on The CWIF weekend which you can read below. If there is anyone else who wishes to do a writeup we'd love to read it and it may even end up on here. All photos courtesy of Alex Messenger, you can view the full gallery on our website here>>

A customer’s point of view: the CWIF weekend round up
By Sam Schofield

The Climbing Works International Festival (CWIF) attracts the best and the brawniest – not just from the centre’s home city of Sheffield, but from around the UK and the rest of the world. It’s not just a competition for the elite, however, but for climbers of all abilities, offering a rare opportunity for the climbing community at large to test themselves against international stars. 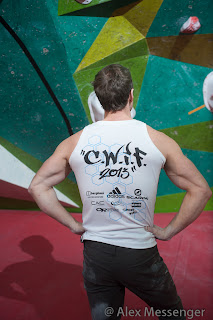 CWIF 2013 attracted 350 competitors from around the globe, hundreds more spectators visiting the centre throughout the two day event, and thousands of online viewers for the competition’s thrilling finale. CWIF garners a lot of attention and is quickly becoming a staple of the competition calendar, with many of the world’s best competitors using it as a warm-up for the bouldering world cup, which kicks off in just a few short weeks. 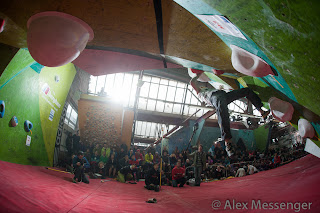 The competition is split over two days, with Saturday hosting the qualifiers, followed by the top 20 men and women battling it out on Sunday in the semi-finals, and finally the top six going head to head on the evening of that same day. It’s a test of route reading skills, strength, flexibility and, not least of all, endurance. It stretches even the best to the edge of their abilities. Many a tweet and Facebook post from semi-finalists and finalists spoke of aching limbs and exhaustion the following day. 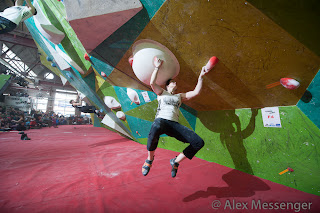 As well as the competition element, there’s a free BBQ and hundreds of goodie giveaways from CWIF sponsors: Adidas, Berghaus & Scarpa. This year was also the first time a charity has been so central to proceedings, with Climbers Against Cancer (CAC) raising an amazing £6,145 in just two days, through the sale of merchandise, a collection bucket and the route setters incredibly kindly donating their wages. As the compère for the final, Percy Bishton, warned: “If you got a free t-shirt and didn’t put something in the CAC bucket something bad will happen to you on the way home”, and from what I gather the majority did indeed plunge into their pockets and give what they could to a very worthy cause. 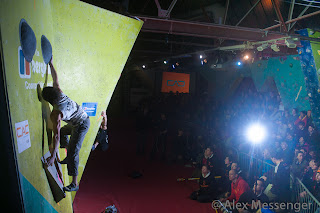 Yours truly took part in the competition for the first time this year. There’s a prize for the best fancy dress and, with no hope of making it into a prize position through climbing ability alone, this was my best hope of victory. Me and my fellow team members formed the Cereal Killers. We dressed as cereal box characters: Tony the Tiger, the Coco Pops Monkey, Lucky Charms Leprechaun and me, as the Scott’s Porridge Oats guy. Trying to climb in a kilt is not especially easy, but it was fun nonetheless. And yes, before you ask, I was wearing shorts underneath! It’s a family event after all. 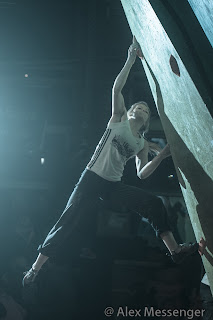 Part of the event’s charm is the fun of it – not too many taking their results too seriously, with only those with a hope of making it through to the next round making it around all 30 qualifier problems. The rest, me included, tend to take their time, socialise, help others on problems with beta or pointing out tiny, hard-to-see footholds, and generally having a ball. While we had a considerable amount of time to make it around all the problems, I still only managed to try 20 of them. I’m told they were set slightly easier than the year before as well, but if that’s the case then they must have been nails in 2012. 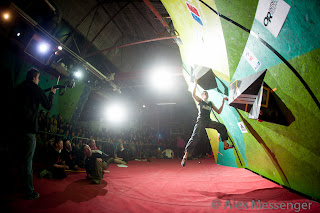 This year the climbing required balance, technical know-how, and very specific sequences. I found it hard. I’m sure many others did as well. I was spat off a 6A+ three times in quick succession. The following day I did a 7B outside, at Curbar, in two tries – that should give you an idea of difficulty. But don’t let that put you off – it’s well worth a go next year!
After a grand morning pitting myself against the qualifier problems in my kilt – and struggling – I was mighty impressed to see the score sheets the following day. The big names had all scored well into the 200s, with a handful approaching the perfect 300 score. 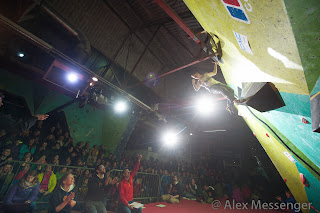 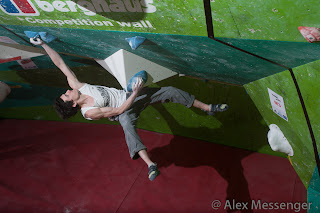 Arriving an hour before the final was due to start, I managed to wangle myself a decent standing position, central to the competition wall, behind the crowd that had already gathered. The CWIF final always draws a hefty number of spectators, keen to see some of the world’s strongest competitors doing their thing. You have to get there mighty early to get a decent seated position, as many stay around all day, to watch the semi-finals and then make the most of the free BBQ. When the finals eventually kicked off, we were treated to disco lights, a loud-o-meter (which regularly peaked at 10 on the Richter scale), and some banging tunes from the DJ. 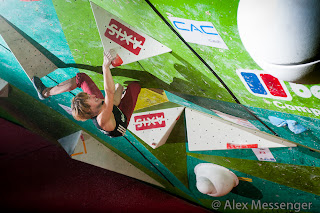 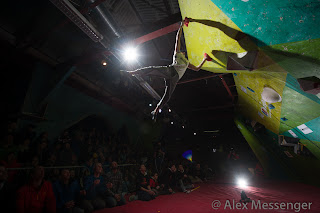 You can re-watch the finals below:


Suffice it to say, it was a flashy affair, matched only by the nail biting spectacle of the climbing itself. A strange start to the men’s competition saw the two shortest competitors at a disadvantage on the slab, having to hover (almost literally!) to match the last hold, while the tall guys could simply stand on a decent foothold and reach. I would’ve felt aggrieved for Schubert and Barrans if they hadn’t made light work of the rest of the problems while the tall guys struggled to heave their heavier bodies through a series of steep burliness. In the end, Schubert triumphed, narrowly beating Barrans by a single attempt. 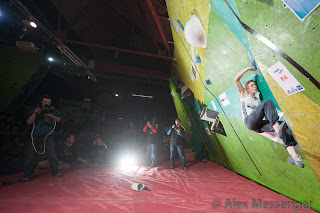 The women’s competition was equally thrilling – a display of power, agility, contortion and finger strength. It all came down to the wire. Leslie-Wujastyk came out on top in both the qualifiers and the semi-finals but struggled to maintain her lead and fell behind Coxsey, Crane and Puccio. It was a battle of champions: the US national champion, a former UK champion and the current UK champion. In the end Coxsey clinched it, to retain her CWIF crown, while Crane came in a close second followed by Puccio – all only separated by their number of tries. 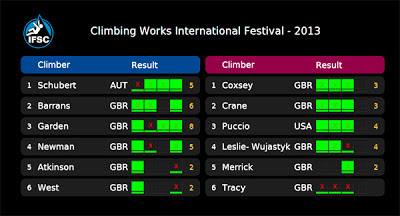 The Final results from The CWIF 2013

After the competition was over, all that was left was the prize giving, another tidal wave of freebies and the raffle draw. And that was that… another CWIF over with. Keep an eye out for next year’s event. 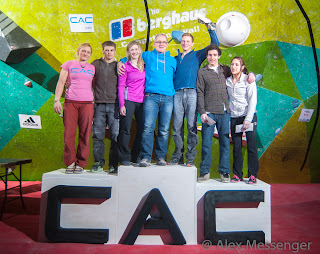