END_OF_DOCUMENT_TOKEN_TO_BE_REPLACED

Today we're making live our new Climbing Works film tour. We've not done one for a few years so below you'll see all four of the tours we've done. It's pretty strange to look back at what the Works was 5 years ago and what it is today. A lot of work has gone into the mission to make The Climbing Works the best bouldering centre in the World. Even though this tour film was finished only a few weeks ago it's already out of date as we've already changed and improved the Scarpa slab. Sometimes we're too fast for even ourselves to catch!

This morning Sam & the Enigma set the new look and newly buily slab. There are a range of problems across the colour and grade scheme (roughly 30 new blocs) so everyone will have something to test themselves on this new part of the wall. 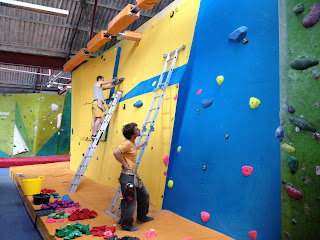 You will also see a new circuit of White holds on the wall. This is being set for the Young Climbers Festival which is taking place this Thursday morning. Now in its 3rd year this is an incredibly popular climbing festival for kids aged 7-15 and it is completely full once again. We are asking our customers NOT to climb on the White blocs until Thursday afternoon as we'll like to keep them clean for the kids. After that, you can use them as normal. 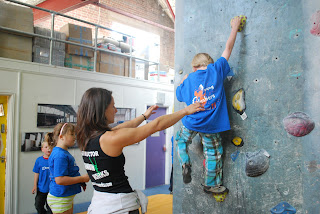 Another day, another new bit of wall. Already this year we've built a new kids wall, a new wall in the center room (House wall) and a new prow and extra wall at reception. That is alot of new build. I think most climbing walls would add the above over a period of 3 to 5 years and you get it all within 8 months.

Not content with that Percy and the Enigma have started work on the Scarpa slab to refresh this bit of wall. Not that old in itself (this wall got a refresh a few years ago) it does take the brunt of traffic and so a change was necessary. So what will you receive? Definitely a slab (don't worry slab fans) but with a slight difference.

The work will continue over the next few days meaning that this part of the wall and a few adjoining walls will be out of action for the next 4-5 days. Once done though, you'll have another new bit to play on : ) 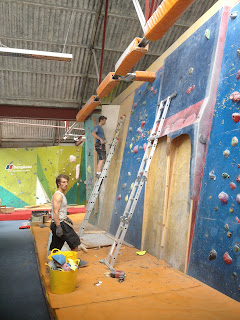 So you want to get strong fingers? Well on Tuesday morning the Works was the place to be as Percy went to work building (probably) the biggest Fingerboard training area. If you're thinking of rushing down this evening to test it out....don't. It was a structure that lasted for about an hour as Percy set up a picture for a Climber magazine fingerboard review that will be coming out in a few months time. 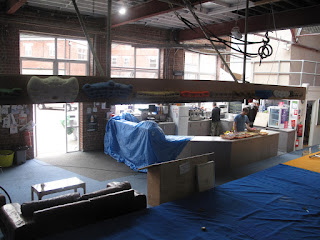 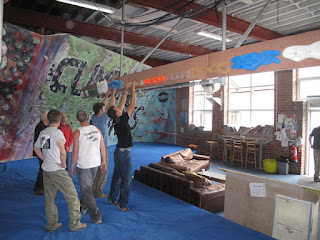 What you will find tonight if you come down is a new blue circuit. The guys are testing them now, the guys being Percy, Enigma, Sam Whittaker, Ned Feehally and David Mason - strong team.