END_OF_DOCUMENT_TOKEN_TO_BE_REPLACED

With just under 2 weeks to go to The CWIF we're over the 300 competitor mark and we have under 20 places left. It's all building up to a great event and we're getting things ready for the big weekend.

The buildup starts tomorrow with a part strip of the Berghaus Competition wall. It will be removed of all its volumes and reset with bolt-on's only. This will probably be the only time in its history that the Berghaus competition wall could be described as 'basic'. All the problems will be taken down next Wednesday morning with also the Red, Green & Pink circuits coming down to make room for the CWIF circuit. The red & greens will go back up on the Monday the 12th March so don't worry if this is your grade range.

Over the whole weekend we will be raising money for the Edale Mountain Rescue Team and Macmillian Cancer Support. Any teams who take part are asked to donate £10 to the charity box while Scarpa & Berghaus are providing £2000 of raffle prizes over the weekend. There will be one very special grand prize that will be drawn on the Sunday night after the Finals with the lucky ticket holder winning £1000 of Berghaus & Scarpa kit! We will also have a number of spot prizes over the weekend, a prize for best dressed (fancy or other) team and our infamous random giveaway during the Finals. 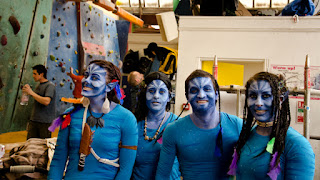 It's going to be a massive event and when you add in ShAFF taking place over the same weekend, you have no excuse not to be in Sheffield on the 10th & 11th March 2012.

To follow all the buildup and going on's, keep an eye on this blog and also our Twitter page. You can also follow the #shaffcwif hashtag to keep on top of things.

In the meantime, watch the 2nd trailer for The CWIF 2012 below and start getting psyched!