END_OF_DOCUMENT_TOKEN_TO_BE_REPLACED

5 years ago this Saturday, 3 Cheeses (and a lot of others) put the finishing touches to the biggest bouldering facility in the world. Only the second of its kind in the UK, it was a foray into the unknown. With the opening day set for the 3rd December 2006, the trois fromage's nervously waited to see who would turn up and see how a bouldering only wall would fit into the Sheffield climbing scene. Well actually it was only 2 of The Cheeses that waited anxiously as Percy was setting for the Dutch nationals on our opening day - typical Percy, slacking off when he was most needed.

5 years later there are now over 20 bouldering walls in the UK and The Climbing Works goes from strength to strength. Since that opening day we have set 1000's of blocs (nearly 2000 in 2011 alone) and have continually changed the walls surfaces - we've made a dozen or so structural changes to the wall including a complete rebuild of the Berghaus Competition Wall earlier this year.

We will celebrate our 5th birthday in style with a massive party at Club Forward in Sheffield on Friday 9th December. It's arguable whether we are still the biggest but we are certain we are still the best, many have copied us but The Climbing Works stays one step ahead...even with its parties. Tickets are available from reception and are FREE to customers. We've already given away around 250 tickets so if you need to get one DO NOT hang around until the last minute. 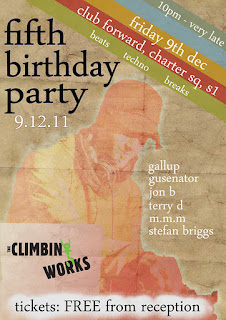 Getting back to normal business. The pink circuit came down yesterday and there will be a new one by Thursday evening. Just another new 40 bloc circuit for you to try ; )