END_OF_DOCUMENT_TOKEN_TO_BE_REPLACED

R1 did not disappoint in providing 'entertainment' for those competing and those watching. The Mens cash problem initially provided a lot of head scratching, then alot of laughs and finally a lot of encouragement as a number of people went oh so close to finishing it. In the end it was 2 Men & 1 Women (Chris Webb Parsons, Adam Bailes & Alex Puccio) that completed it taking home a share of the cash prize. 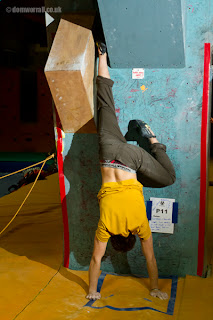 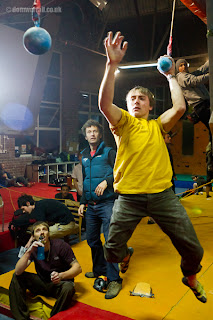 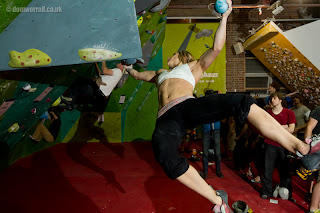 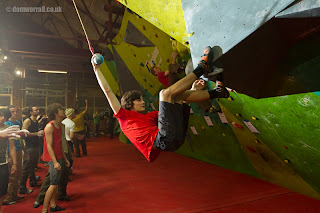 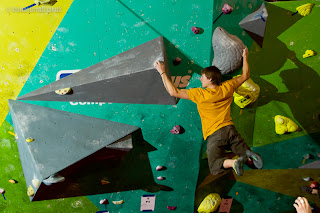 Over on the Women's problem a 7b volume only smear fest scared most that went near it. After some impressive falls and a few bruised shins, both Alex & Leah Crane came away with a split of the winnings. 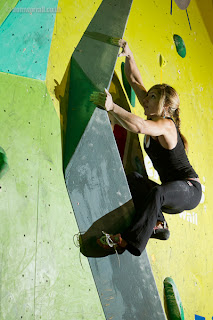 While all this was going on a few of the men were racking up some good scores with only 9 points separating the top 5 places but they were well outshone by the impressive exploits of the junior Nathan Philips who out scored the top man by 40 points!

The Berghaus Competition Wall now has the full 25 blocs from R1 (excluding the start of the Mens cash problem - see photos to see why) + another 6 that Percy set yesterday.

We'll announce the winners of the Evolv prize draw tomorrow so keep an eye on the blog to see if you won a prize for handing in your score card. Round 2 will be on Friday 16th December.