END_OF_DOCUMENT_TOKEN_TO_BE_REPLACED

Yesterday we had something happen for the very first time. A theft from The Climbing Works. We've been open nearly 5 years and we've never before had a confirmed theft in here. Yesterday somebody came in, went through some peoples bags, and left with 2 phones. The Climbing Works is deeply unhappy with this and really hope it was someone who managed to avoid our reception staff and not a member (or guest). If we find anyone stealing in The Climbing Works we will bring the full force of the law to bear and make sure that person finds themselves very much in the s##t.

We try to hard to provide a safe, comfortable and friendly atmosphere. Sometimes this can be disrupted by external forces. We'll try and re-balance this by coming up with some more security options for our customers. In the meantime if you have anything valuable please use one of our lockers that are free to use. Even better  leave it at home or in your car.

We want to bring this to the attention of our customers because it is not fun when personal things get stolen. We, as a business, like to be nice. If we find someone stealing, we will not be nice.

We're pretty good at changing the problems in here, usually setting a new circuit every week. The one thing a few people have mentioned is that we've not set a really hard Yellow circuit in a while. Well those people can now rest easy as this morning we stripped the old Yellows and Percy & the Enigma have started setting. Until Thursday (when the rest will be set) you have 10 blocs to test yourself on. At the moment I think 2 of them have got done by any of the testers....that's a good sign. If you're here on Thursday and are trying the new Yellows you'll probably be glad to read that the Clinic physio team will be here from 7.30-9pm. I'm sure they will be able to sort out that tweaky elbow that you just got from pulling too hard on a rubbish, yellow, hold. 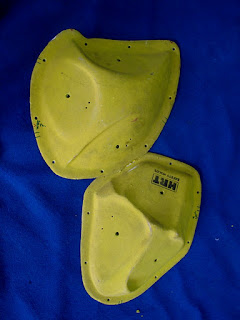 Looking forward a few weeks we have the Evolv Winter Bouldering League starting on the 11th November. To prepare for this Percy has been busy in his shed building some new volumes to set on the Berghaus competition wall. As you can see below there are some interesting shapes.... 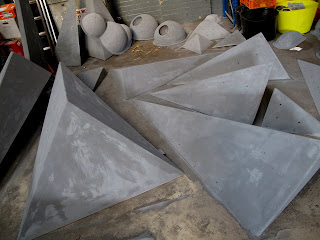 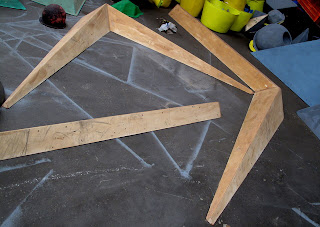 As he has built some new volumes, we have retired a few older ones. They're not in the greatest shape but with a little bit of love and care (and maybe some sandpaper) you could have yourself a Climbing Works volume to train on for the Winter ; )  One volume will cost you £10. Email info@climbingworks.com or give us a call if interested. The big pile of old volumes

There is a new Black circuit going up as I write so by this evening you should have 40 (or thereabouts) new blocs in the Font 6a range to test yourself on. Next week see's the Yellow circuit come down so for those who like their holds small and their problems brick hard....next Friday is the day to look forward too.

Other dates for your diary include the next FREE physio session brought to you by The Clinic. It will be held on Thursday 20th October from 7.30 to 9pm. If you have any aches and pains this is a great way to get an expert opinion on them.

If you've got kids, friends or family sitting around over October half-term you should check out our range of bouldering sessions going on over the week of the 24-29th October. There's something for just about everyone.

The day after the night before.

For the 2nd year running we sold every available space for the Reel Rock Tour. This year though we had sold all 250 tickets by Sunday morning meaning an afternoon of our staff telling disappointed people over the phone that there would be no availability on the door. Even with this notice, some people still turned up hoping to get in and not being an evil climbing wall (well, not that evil) we managed to fit everyone in for the nights show.

And what a show. A collection of films that left the crowd laughing, open mouthed and stunned at some of the footage. From the top of an 8,000m Himalayan peak in Winter to back flips on a highline slackline in the Moab desert, the Reel Rock Tour once again showcased the people doing some of the most extra-ordinary things in adventure climbing.

There are further shows happening in Dublin, Bristol & London over the next few months and if you live anywhere the screenings, get those tickets early as you won't be disappointed.

We also held a raffle last night in aid of the community AED that we hope to install in the next few months. We're busy counting up the cash from it so a huge thanks to everyone who contributed and a massive thanks to Berghaus for supplying the raffle prizes.

If you missed out....you'll just have to wait till 2012. In the meantime those who were there can revisit the nights highlights by watching the trailer again: