END_OF_DOCUMENT_TOKEN_TO_BE_REPLACED

The BMC have produced some new guidance on the use of Campus Boards and it makes for very interesting reading. The simple guidelines can be read here while the detailed article outlining some of the evidence behind these Campus Board guidelines can be read on the BMC website here. This should be read by everyone, from parents to experienced climbers, as it is an eye opener for U18's and adults alike. 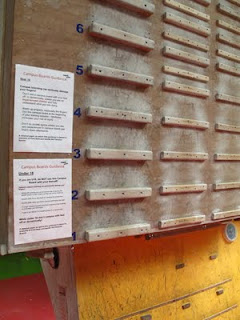 We've put the guidelines up beside the Campus Board

A couple of noticeable changes in The Climbing Works this morning. The Wasp circuit has came down with a new one to be finished by this Friday. We've also revamped the Volumes wall a little which you can see from the photos below. Until the new Wasp circuit goes up you'll just have to climb the 10 other circuits and the 35 problems on the Berghaus Competition Wall, topos of which are now available from the website news pages. 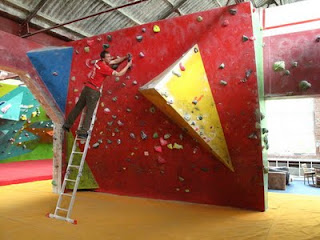 The old wall with the massive Yellow volume on it 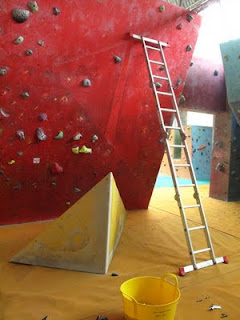 The big space left behind from taking it down 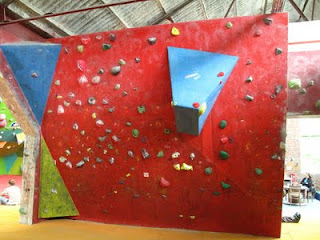 And the new Blue volume gone up in its place. This meant resetting all the problems that went through the old volume so you now have a range of blocs using this feature. Some are completely changed, some have had tweaks.

This week coming sees The Clinic Physio return on Thursday night from 7.30pm. If you have any annoying niggles, this is the time to come get some FREE advice.

If you've been on the web this morning you might have already seen the 1st trailer for the new UK Bouldering film that is currently being made. Outcrop films are the team behind it (they also did some of our CWIF films) and from this trailer, this looks like its going to be a cracker of a movie.

In the last week we've been getting back to setting some new problems. Yesterday a new 40 bloc (5+ to 6b'ish) Purple circuit went up, while earlier in the week the Berghaus Competition wall received 31 new blocs with another 4 going on this morning courtesy of Sam. The Berghaus Competition wall now has a topo on the mats underneath it or you can have a look on the website here to see what grade 'that problem you got shut down on' was. Those doing the math will figure out that all this equals 75 new problems in the last 7 days from Font 4 to 7c+. Not bad if we do say so ourselves.

Also this week we have reset one of the kids boulders, with the other being reset in the next 2 weeks. There was also a very successful FiveTen shoe demo and a very psyched Adult Improver's challenge night. Next week see's the return of the Clinic to The Climbing Works so if you have any niggling injuries, come down next Thursday to get them checked for FREE.

We also twitter'd and put on the website about the BeanFever lecture night. A heady lineup of climbing lectures all in the aid of a very good cause. Get your tickets at The Climbing Works for this (bound to be) brilliant night.

Finally, if you've had a long week and want a break from work / a bit of psyche for the weekend, check out the bouldering video's below for a bit of action from places 'far from the norm'. The first one is our own mild mannered coach Dave Mason crushing at Fairhead in Norn Iron while the second is Dan (Beastmaker) Varian checking out the delights of Torridon in Scotland

Last week Percy and Longy ran the BMC National Routesetters course here at The Climbing Works and at The Foundry. Percy give them a blank Berghaus Competition wall and got the upcoming, routesetting, young guns to set on it under his watchful, intimidating, eyes.

This week you get to climb on these (20 blocs) and another dozen giving you a comp wall set that are a little harder than usual. There will be a topo on the mat by Wednesday afternoon.
For those WADs looking for a bit of stamina you get a F8b+ traverse that will get all but the fittest faltering and welcoming the soft red mats underneath the wall.

Back on the main walls we've got the Purple circuit coming down today with a new one going back up by the end of the week. Also getting a re-set is the kids boulder with Michelle and Dave stripping and setting one of the blocs today with the other getting changed at a later date.

Tomorrow night, Wed 18th May, we will be hosting a FiveTen shoe demo. This is your chance to try out shoes from across the 5.10 range. You can get a pair of technical tens and wear them all night to test their effect on your feet, or mix and match to find that perfect pair. It's a great opportunity to really find the right pair of climbing shoes for you. Starts at 6.30pm and goes on till closing so make sure you get down.

On Sunday, Dave Mason will selling a whole load of Moon sample's. These are sometimes unique items (never went into production) and some may be current season but all are at an amazing price.
Sunday 22nd May at the Works from Noon.
Trousers and hoodys- £15
Shorts and tees- £10
Women's softshell jacket-£30

The last couple of weeks have been all about routesetting for me........ Actually, my whole working life has been about routesetting, but recently its been more on my mind than usual. Last week I was in Slovenia working as Chief routesetter for the IFSC bouldering world cup in Log Dragomer. It was a very cool competition, and I had a great team of guys helping me to set some proper filth. Your Honour, I give you exhibit A (a film from Udo Neumann)

Watch out for the spectacular fall around the 4 minute mark that really enforces the fact that bouldering is a dangerous sport!o) (She was fine, and got back up for another go, by the way!)

This week though, I'm working with Mr Long teaching a bunch of reprobates how to set for competitions for the BMC National Routesetters course - bouldering with me at the Works, and Lead climbing with Mr Long at some place called The Foundry. Never heard of it.

Next week, I might get down off my high horse and actually do a bit setting for everybody at The Works to enjoy instead, you never know.......

Percy has been giving the Boulder World Cup competitors in Slovenia a right good seeing to but they had a few surprises up their sleeves that left even Percy flabbergasted for once.

In the women's semi Percy's blushes were spared by Anna Stohr who realised that not even Percy would put 2 massive volumes on for no reason at all - the rest of the women had tried to avoid the volumes with a massive horizontal dyno.

In the men's semi the 1st problem involved a relativelyy simple hand traverse on wooden volumes. The climbers couldn't work it out so instead lots of them decided on a ridiculous sideways dyno that even after CWIF hero Jernej Kruder had succeeded in holding the dyno Percy still said it wasn't possible.

Graeme has been busy ensuring that everything runs smoothly, an easy job in Slovenia where the organisers have World Cups evry year for the last 15. So I have had to satisfy myself with getting in the way of the cameras - apparently my backside has been obscuring the view - something I find hard to believe as I am not exactly known for being over-weight. The finals will be stating in a couple of hours, it's chucking down at the moment but the boulders and the audience are dry thanks to the enormous tent.

Stew Watson was oh so close to getting into the final, just failing to campus to the finishing 'jug' on problem 3. Twice!!!! Gutted for him. But 9th is still a great result.

The long Easter holidays have come and gone and for most its back to the grindstone of work and play. At the works we try to combine the two as much as possible, while the whole idea of public holidays mean little in here (got to stay open to give you lot something to do when you're off work). This all means that if you've not been down much in the last few weeks there is alot to go at.

How much you say? Well in the last month we've set 217 new problems!!! That's a new Purple/Pink spots, Green, Blues, Reds (on new holds) circuits, plus a new Berghaus Comp Wall set and going up today, a whole new Green Spotty circuit. That is alot of problems!!

Not content with all that, this weekend is your last chance to climb this Berghaus Comp Wall set (which has only been up for 3 weeks) as they are all disappearing on Tuesday due to a BMC routesetters course being held at The Climbing Works next week. Also on the Berghaus Comp wall at the moment  is a traverse of the whole wall that comes in at a heady F8b+!

While talking about routes its worth mentioning our very own mild mannered MD Sam Whittaker who in the last week managed to send his project at Malham, Unjustified, F8c. Not content with that, in the week after he ticked an 8b, 8a+ and 2 8a's. Bouldering obviously ain't too bad for route climbing.

This week we've also uploaded another montage from The CWIF that was held in March. Very nice editing from Adam Bailes of Minus Ten productions:

Our Percy is over in Slovenia at the moment working as Chief Route Setter at the IFSC Bouldering World Cup that happens this weekend. They obviously love and respect him as much as we do because they've given him a car to drive around in. 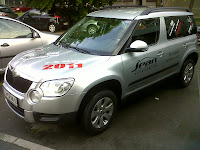 He only has it on loan though and has to give it to the IFSC Technical Delegate when he (me) arrives on Thursday. Let's hope it doesn't end like this one. 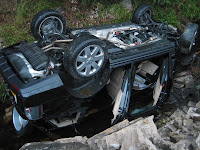 (Note: no stupid North Easterners were hurt very much in the making of this photo)