END_OF_DOCUMENT_TOKEN_TO_BE_REPLACED

What a Final!! What a day!! The Climbing Works International Festival 2011 came to a close last night in an amazing session of top level bouldering.

The Mens and Womens Final provided some amazing action with a range of problems that tested the strength, skills and tenacity of all the finalists. At the end of the night we crowned two new champions. 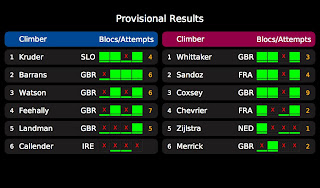 
In the Mens, the only non-UK based climber in the final, Jernej Kruder of Slovenia, became CWIF champion with a display of immense power and strength that showed why Jernej may just be the strongest man in Slovenia (and one to watch in the coming years on the World competition scene). 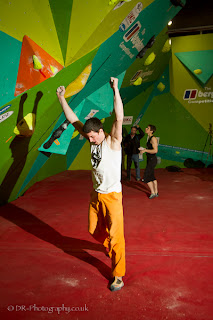 In the Womens final, our very own, Climbing Works mild mannered receptionist, Katy Whittaker triumphed by the narrowest of margins over Melanie Sandoz of France. Katy sealed her win by flashing problem number 4 but it could be oh so different if Melanie had managed to hold the cut loose / swing on problem number 3. 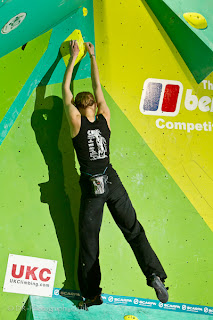 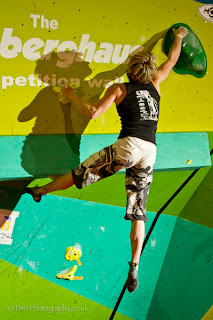 The full results are available to view in pdf format below:

You can view some more photos online at our Climbing Works Picasa albums here. We'll get more up over the next few days along with some film footage.

We'd like to thank everyone for coming down to watch and take part. We ended up having over 300 competitors for the qualifiers and for the Finals, we had people standing in the car park looking through the windows to catch a glimpse of the bouldering! It was indeed a packed out arena. Over the course of the weekend we also raised over £1000 for the Andy Earl charity which is a fantastic effort from everyone. Andy was watching the live streaming and throughly enjoyed watching the competition, especially Graeme wearing a Newcastle shirt. Thanks to everyone who donated some cash.

We'd also like to thank the Sponsors of the CWIF: Scarpa, UKClimbing.com, Holdz and HRT Holds for supporting this years competition. A big thank you to Scarpa, OR, Holdz and Berghaus for giving prizes for the raffle that helped raise so much money.

For those coming down today you'll have the Final problems to try plus a whole range of new problems that have been set this morning....no rest for The Climbing Works..