END_OF_DOCUMENT_TOKEN_TO_BE_REPLACED

Alot has been going on in the last week so it's worth a quick summary to make sure everyone is up to date.

Percy and the Enigma have set a new 39 problem Purple circuit (Font 5 to 6b) that has already been getting some rave reviews with a couple of 'interesting' technical blocs that you may want to send your friend on before going for the flash.

Over on the circuit board Sam and Steve McClure have set 2 new enduro style circuits coming in at F7c+ and 8b+'ish. Whatever your taste, we have something new for to test yourself on.

On the subject of testing yourself, this Friday is the last round of the Winter Bouldering League (supported by FiveTen). This will be the LAST ever competition on this version of the Berghaus Bouldering Wall as 5 days later it will all be coming down to be replaced with one that will bring people to tears (probably starting with Percy, Longy and Pickles but i'm sure more will follow). This last round also has a prize of £375 for the Women's cash bloc as it has rolled over the last 2 rounds. All in all, it's a great reason to get down on Friday for the competition - 25 problems to text yourself on, and the enjoyment of watching some of the best British female boulderers going head to head for a big cash prize. 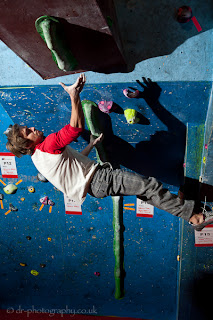 As it's the end of January we also have a special offer for you in the shop. 30% OFF (at least) our range of down jackets. You can see the range of Men's here and Women's here in the online store

After the easy blue circuit last week, we'll be setting a new purple circuit (old one got stripped this morning) on Thursday. This will be in a similar grade range as before.

Also getting a bit of a change is the circuit board. Sam, this morning, has stripped 2 of the circuits on the board (the yellow purple spotty c.7b+ & the easy Orange circuit). These will be replaced on Wednesday by guest setter, and local hard core Sheffield resident, Steve McClure. These 2 circuits will likely come in around the mid F7 and mid F8 grade. Something for the stamina wads to get their teeth into.

CWIF:
We opened The CWIF registration 10 days ago and we've already had a great response with 62 entries 6 weeks before the competition. Get yourself signed up today>> The same weekend as The CWIF is ShAFF. Check out the ShAFF website for the full film schedule and the list of events rolling up to the weekend. You can see trailers everyday including the one below for Crachoholic, a Swedish trad climbing film:

To get some training in for The CWIF, we've got the 4th & final round of the Winter Bouldering League (supported by FiveTen) taking place on Friday 4th February. This will be the last ever competition on the old Berghaus Competition wall with the problems only being up for 4 days before the whole wall comes down on the 9th Feb. This final round will have a Women's cash prize of £375 attached to it as no female has completed it in the last 2 rounds (get training ladies!!).

A little later than normal, but below you can see the highlights film from round 2 of the Winter Bouldering League. You can see the scores from this round on our website. Time to build the psyche...

The Climbing Works has been open for 4 years, in which time we have had well over 300,000 customers through our doors. Needless to say, given this level of use (and abuse) our walls get pretty worn out. However, one wall in particular has been particularly abused - our competition wall. Since we opened we have completely reset this wall a grand total of 49 times (and re-painted it 3 times). If you want an idea of how well perforated a climbing wall can become given the number of screws that have gone in and out of the panels, check out this photo of a small section of the wall. Taken at night, with a light behind the wall, you start to see just how riddled with holes the boards have become.... 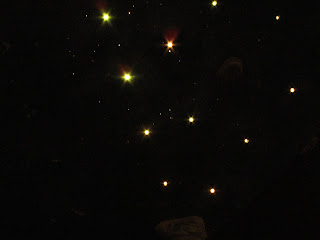 Anyway, rather than give the wall another lick of paint and ignoring it, like most other walls, we have decided to 'man up' and sort it out properly.

So the final round of the bouldering league on the 4th of February will be the last event held on the comp wall, before we pull it all down and build a lovely new shiny one, just in time for its christening at the CWIF

The last chance to climb on the comp wall in its current incarnation will be Tuesday the 8th of February. From the 9th to the 18th of February an experienced team of chancers (me, Longy, Pickles and the UF) will be found pacing about holding incorrectly sized bits of timber and scratching our heads whilst we create our new and improved comp wall. Then it will be handed over to Mr Whittaker for painting before its grand unveiling at the CWIF. Obviously, during the construction of the new wall, all of the other walls at The Works will be open as usual (except for the Beastmaker board, but its about time the saddo's who only ever train on there climbed on some other bits of wall anyway, so its all good !o) ) The CWIF circuit will have problems on this new section of wall aswell as everywhere else throughout the centre, so if you want to be one of the first to climb on the UK's biggest and best fixed competition wall, get yourself booked in NOW!

We are now accepting competitor registrations for The CWIF 2011.

In 2010 we had 200 competitors (full capacity) and had to close registration about 10 days in advance of the competition. This year we're making it a 2 day event with Saturday having 2 qualification rounds, this will allow us to increase the capacity to around 350. Do NOT leave it late to enter, pre-registration will be required so get the date of Saturday 5th March pencilled in and enter ASAP (registration is, as always, FREE).

This year The CWIF will be bigger and better. Read about The CWIF 2011 on our CWIF page here and watch some of the highlights from previous CWIF years on our YouTube page here.

The same weekend of The CWIF (5th & 6th March 2011), ShAFF will also be taking place making it an action packed weekend to be in Sheffield. 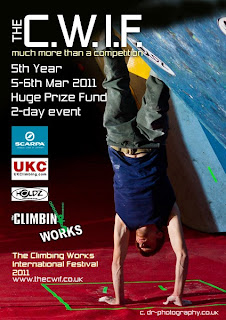 Friday night saw R3 of the Bouldering League with a good crowd out trying to work off the excesses of Christmas.

The Men's cash problem was a bit different this round in that there was not one yellow volume involved. Instead the boys brought out the CORE RAF holds and created something basic. Ned van der Freewilly was the first to get it sent making sure he got a piece of the £125 cash prize. That piece got ever smaller as Dan Varian, Dave Mason, Rich Ames and Leo Molger (CORE owner so maybe inside knowledge?) brought their beastmaker board strength to the dirty open pinches. £25 each is still not a bad return for a couple of hours climbing. 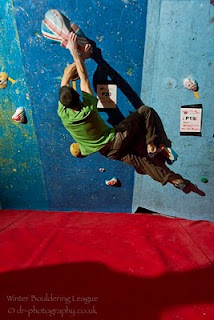 Over at the Women's problem, the £250 was left in the safe as the problem defeated those who tried. Next round (the final 4th round) will see the Women's cash prize go up to £375!!! Who will come and collect it??

You can see the full results of Round 3 and the current overall standings on our news page on the website. 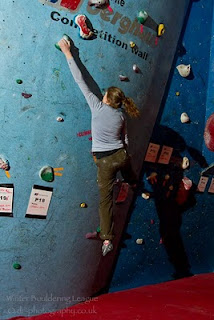 The 2 winners in round 3 of a pair of FiveTen shoes are Hannah Wilson and Jon Daynes. They win a pair of 5.10 shoes of their choice (thanks to FiveTen). They can collect them next time they are in The Climbing Works. How did they win? By simply handing in their scorecards. We notice that a fair few scorecards go out but alot of them don't come back in. Next round, hand yours in for a chance to win. 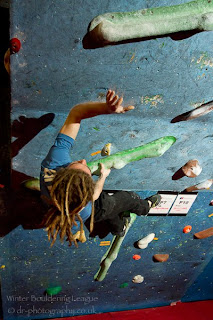 The 4th and final round of the Winter Bouldering League, supported by FiveTen, will take place on Friday 4th February.


You can see the full album of photos for Round 3 on our facebook page or by clicking on this link (you don't need to be on facebook to view them). Thanks to Dom Worrall - www.dr-photography.co.uk - for coming down to shoot and sending us the photos so quickly. 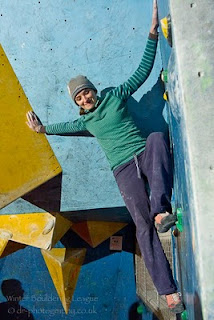 Tonight see's the return of the Winter Bouldering League with Round 3, and the first of 2011, taking place at The Climbing Works tonight.

As the snow continues to fall outside, and heavy rain forecast for later tonight, it's likely that the peak won't be in the finest of nick for a few days. Come down tonight to the driest crag in the peak district, get beasted on some classic problems, listen to some top tunes from Gallup & the Gusenator and start working off that extra weight from Christmas.

You can see what to expect by watching the highlights film of Round 1 below:

The Climbing Works can't force you to do these things, but we can provide the facilities for you to carry them out. Last year we set over 1500 problems for you to test yourself on. In 2011 we start the resetting with the Berghaus competition wall and Round 3 of the Winter Bouldering League.

The wall will be stripped Thursday so you only have two nights to get those old projects ticked. The comp will start Friday night at 6pm and will consist of 25 problems of all styles and tastes. We will of course have the 2 cash problems but for the Women we have a late Christmas present.
In the last round there was no female winner of the cash problem so that means we have a rollover. One (or more) lucky ladies will have the chance to win £250 on the special Women's cash problem. We will be checking for imposters so Ned & Dave, don't even think about donning wigs.

So if you want to start the year off with a good start, come down to the competition and start working off that Christmas pudding. At the very worst, you will feel inspired to get your ass in gear for the coming year.