END_OF_DOCUMENT_TOKEN_TO_BE_REPLACED

Big, well organised sporting events are great. We take so much for granted when we go to a premiership football match, or Wimbledon, or a big athletics meeting. We just go and see the best athletes in the world at their chosen sports competing at the highest level, with all the bells and whistles. And it's brilliant.

Pity then poor climbing. A niche sport, with a small following. There's no way climbing will ever be able to compete with 'proper sports events' at least not in the UK. However, it's worth bearing in mind that other countries treat some of our perceived 'niche sports' with much more esteem and fervour. Us Brits love football (so they say!), the Belgians and Italians are passionate about cycle racing, Scandinavian countries get all excited about skiing, and so it goes. I guess if you're good at something, its easier for your countrymen to get behind the sport and make it a big deal (the Brits being good at football is maybe the exception that proves the rule!)

So it's only right that when Austria hosts the European Climbing Championships that it is a big deal. In Austria climbing is a massive, with champions in most of the disciplines with the exception of speed which remains the love of the Eastern Bloc countries and the Chinese (because they're brilliant at it - sports are only big and important when you're good at them, remember!)

Yes, mention the people winning World Cup lead climbing and bouldering competitions and you'll have a lot of Austrians in there - Killian Fischhuber, Anna Stohr, Jakob Schubert, Angela Eiter, Johanna Ernst, David Lama, Katarina Saurwien, etc, etc. Not necessarily big names on UK climbing scene, but then we don't really bother to lower ourselves to taking part in silly climbing competitions and so we have no interest (which is a shame, because when we do bother to be interested in international climbing competitions we actually do pretty well. But anyway, I digress)

The lead climbing competition took place on the amazing new outdoor competition wall in Imst - a wall so big, steep and impressive that you suddenly realise why the Austrians are so good at climbing. With the level of government funding for facilities such as this (€1.5 million, someone told me!), it's no wonder that the place is a breeding ground for climbing talent. If the Imst wall was your local climbing wall, all of its customers would be climbing 7b's within a matter of months, or they would have taken up another sport (which is the common misconception about so called "elite level" sports facilities). Rather than being off-putting, this type of climbing facility is so inspiring, I defy you to show me a psyched young climber who would not be motivated to train and get better at their sport after a trip to this place. It's awesome.

Meanwhile, over in Innsbruck the bouldering competition was taking place. As with the lead event, the Austrians had made an enormous effort to make this event as big a spectacle as they could. So they put their bouldering walls on a stage in the middle of Innsbruck's Martplatz, next to the river with a backdrop of beautiful mountains. Then they put an enormous roof over the whole market place (no small feat of engineering) so in the event of rain the thousands of spectators in the grandstand seating would not get wet! Add a few giant TV screens showing replays of the action and live results, loud music and a hugely over-excited commentator, fancy lights and a big beer tent and you have the recipe for an amazing sports event. 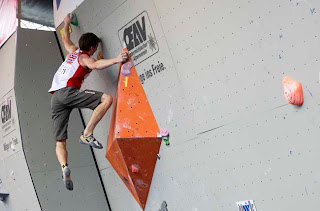 Stew Watson (Gbr) in the semi-finals

The only other climbing competition in the world that puts as much effort into making their event such a big show is the Arco Rockmaster, but I'm sure that the 2010 European Championships knocked that event into the proverbial cocked-hat in terms of scale and excitement.

Traditionally when writing a competition report, (and I have written many over the years), I should now tell you what happened, and who won and lost and all the details, but to be quite honest I get the impression that nobody in the UK really cares, so I'll just list the winners at the bottom of the page. However, let this serve as a timely reminder to the powers that be in charge of British competition climbing (your very own BMC) that the UK had no representatives in the Lead climbing event (an event won by Ian Vickers in 1998 when we still cared about competitions) and currently doesn't have any sort of senior lead climbing team. Our bouldering team is still going somehow given the lack of funding from our sports governing body (again, the BMC) and we did pretty well considering. Stewart Watson even managed to get 8th place, but then again, he now lives in Austria and so can make use of proper training facilities in a country that treats competition climbers as proper athletes.

Whilst my cynical ranting and biased opinions may not be to many peoples liking (or particular interest) the bottom line is this. The UK climbing scene is getting left behind, and it's no good making excuses anymore (not enough rock, not enough money, not enough expertise, etc, etc.) We're basically pretty rubbish compared to everybody else, and I strongly believe that this is largely due to the BMC still being unable to treat climbing as a sport instead of some austere pass-time for gentlemen in tweed. Some of our best young climbers (Stew Watson, Hazel Findley, Tom Bolger, James Pearson) have moved countries that are passionate for climbing and have better facilities to help them improve (Austria, USA and Spain) and have reaped the benefits

I hate to be down on the UK climbing scene because I love it so and I hate being so negative, but whilst the rest of the world is on-sighting 8b+, and climbing 9a's is a pretty common occurrence that would get little or no publicity in the foreign climbing media, us Brits still get excited when somebody redpoints an 8c. French school-girls onsight 8c, for goodness sake!

Anyway, ranting aside, the winners were... 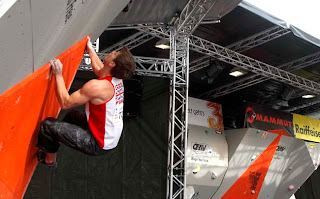 Dave Barrans (Gbr) climbing in the qualification round 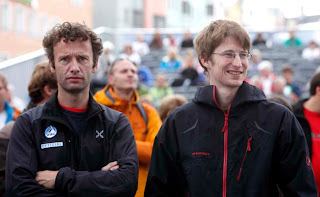 Yours truly (looking official?) and Martin Hammerer (one of the excellent routesetting team) 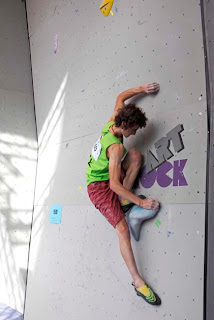 Adam Ondra trying a Bishton Slab - he managed in the end! 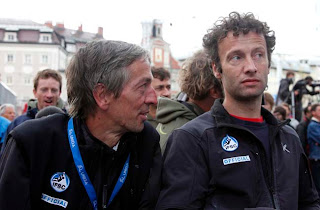 IFSC Officials, or a pair of chancers?! Only Climbing Works customers know the answer...