END_OF_DOCUMENT_TOKEN_TO_BE_REPLACED

The 4th CWIF took place in March and was a huge success. We had over 200 people enter and we must have turned away at least 50 other people in the 7 days in the run-up to the event. You can watch the 2010 highlights film at the bottom of this blog.

It's fair to say that the CWIF is becoming a big competition...which is what we always wanted - A UK based competition that attracted the best from the UK, Europe & beyond. What we don't want to lose is the friendly & social atmosphere that allows normal Climbing Works customers to climb alongside these WADs. To connect the increasing international and domestic popularity of the CWIF we've made some slight changes to The CWIF 2011. 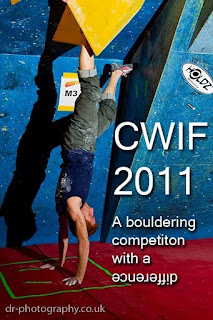 The biggest change is that CWIF 2011 will now be a 2 day event taking place on Saturday 5th and Sunday 6th March 2011.

The last 4 years, the CWIF has tested the guile, strength and stamina of the competitors over a day that can last for nearly 12 hours for the finalists. In 2011 we will change to the format of having the qualifiers on the Saturday and the Semi's & Finals on the Sunday. This will allow us to increase the overall number of competitors from last years 'too few' 200 to at least 300.

On top of this we will be teaming up with the Sheffield Adventure Film Festival (ShAFF) to deliver a weekend not to be missed. As the year continues we will release more information regarding registration etc... but in the meantime you can have a read of CWIF 2011 on our website to find out a little of what to expect.

You can also watch the highlights of CWIF 2010 on the film below. We've just used the footage from the webcast stream for this film so apologies for missing some angles but we hope you enjoy it.