END_OF_DOCUMENT_TOKEN_TO_BE_REPLACED

The Bouldering World Cup circuit moves on from Vienna to Vail this weekend.

Cliffhanger is the penultimate round of this years circuit and if you want to see some mutants performing their amazing tricks then it is definately the place to be on the 3rd & 4th July.

Vienna saw Stew Watson get to his first final where he was oh so close to getting on the podium. Check out the little video quickly put together by Udo Newmann

Graeme is off to Colorado in the morning to see that everything is done properly and he promises to let us know how things pan out. It's a dirty job..........

BTW there is no live webcast from Vail. The next one is from Eindhoven on the same weekend as the BBC. Cliffhanger will also be webcast.

Our totally impartial IFSC Delegate is not allowed to rejoice about the fact that Stew Watson has qualified for his first ever Bouldering World Cup final out here in sunny Vienna.

Graeme will not be biting his nails in the final which starts at half six Works time while his watches Stew try and equal or better his third place in the semi finals.

Graeme won't be secretly hoping that uberwads Adam Ondra & Kilian Fischhuber make a mistake to allow Stew to get top spot. Oh no, no way would Graeme be that impartial.

Webcasting will be here

Well Graeme managed to get himself on the webcast microphone reminding some Australian friends of The Works that England hold the Ashes & are World T20 Champions. And the Aussies aren't.

What happend in the Boulder World Cup. Well we have 2 Brits in the men's semi, Dave Barrans squeezed in after topping 2 blocs in his half of the draw but Stewbacca Watson did really well, qualifying in 7th in his group after topping 4 out of 5 blocs.

Diane Meerick and Marina Phylidia Leslie-Wuyastyk (Mina Wudgy-Wudgy to you and me) will be climbing in their qualification round at 4pm (BST).

The live webcasting is here

Graeme will be trying to spoil the webcast from the IFSC Bouldering World Cup which starts tomorrow in Vienna. The webcast is free and can be seen here

Hopefully the Austrians will stop him getting into shot but check whether you can spot him.

We've got some very special offers at the moment in The Climbing Works Shop that are certainly worth checking out.

On the climbing front we have 50% OFF the classic Scarpa Visions. These were a mainstay of the Scarpa range for years, famed for their all-round performance alongside comfort. Were £80, Now £40!

For the ladies, we have the FiveTen Siren at 25% OFF. This is similar to the visions above, offering comfort alongside an all-round performance. Perfect for long trad or sport routes or all day bouldering sessions. Only small sizes available in this shoe - Was £70, Now £50

We also have shoes that will get you to the crag....or the pub, wall or club as next up we have the Five Ten Freeriders. These 'bad boy' shoes are designed for mountain bikers but have been a popular choice for climbers looking for something a little different from your normal approach shoe. The 2 colours below are being discontinued so now is your chance to get a pair before they disappear for good.

Percy and Matt finished off the last remaining problems yesterday to complete a new 40 problem circuit in the Font 6b to 7a+ range. This now means we have 11 circuits on the main walls plus a new Berghaus competition wall with 27 problems on it. This roughly gives you over 450 problems to try....this is also not including the circuit wall or the beastmaker board....think we'll keep you busy for a while.

Need a little beta for the new pink circuit. Watch the 2 videos below to give you a taste of what to expect on the new circuit

Earlier this week Percy finished off the current Berghaus Competition wall reset. These problems replaced the CWIF final problems that went up in late March.

You now have 25 problems to go at from 5+ to 7c'ish. We will have a topo for the wall all finished for Monday. In the meantime you can watch the film below of some local heroes testing the new set.

Percy and Matt have also started the process of resetting the pink circuit. Again, this was from the CWIF. This time the problems will be in the range of Font 6b to 7a+, or as Percy puts it - the grade of  "finesse". Should be all done by early next week. Enjoy the warm weekend.

It's nearly the weekend and you're sitting in work on a warm, muggy day (well, it is in Sheffield).

If you're looking for something to take you away from that boring work, or something to get you psyched during your lunch hour for training later tonight then check out the 2 videos below from last weekends Boulder World Cup held in Greifensee, Switzerland.

Graeme 'Cheese' was there in his role as technical director of the IFSC Bouldering World Cup series this year (basically he gets to go to loads of competitions around the World - git). He wrote a report for the website which you can read below:

"The 1st Boulder World Cup of the year is over with America and Austria taking gold. Silver went to Akiyo Noguchi of Japan and Adam Ondra of the Czech Republic. Bronze was taken by Christian Core of Italy & Chloe Graftiaux of Belgium. Both categories went down to the wire.


In the female category anyone of 4 climbers could have won if they completed the final problem. Chloe came closest but in the end Alex won by virtue of getting all of the bonuses in the least number of tries.


In the male category Adam pushed Kilian all of the way. Adam flashed 3 out of the 4 problems and Kilian knew he had to do the same. And he did, climbing magnificently. The two were tied in the final so Kilian won on countback.


Christian Core came a brilliant thrid place and in an emotional speech after the award ceremony devoted his podium place to his great friend, the late Giovanni Cantemessa.


The full set of results can be seen on the IFSC website.

This year, Sheffield will be hosting a round of the Bouldering World Cup, taking place at Cliffhanger over the weekend of 3rd / 4th July. The whole British squad will be there alongside the best international boulderers. Make sure you're there to watch this amazing event.

Videos:
You can watch some fantastic footage of the comp below. The first has 3-4 mins of the Mens final problems and the duel between Adam Ondra and Kilian Fischhuber, it then goes on to show the fantastic final competition between Alex Johnson and Akiyo Noguchi.

The second film puts the spotlight more on the Men's competition with Adam and Kili taking center stage. Worth watching just for the different styles, especially Adam's absolute reckless approach on one of the Semi-Final problems.

So there you go, something to get you motivated for a bit of bouldering and training. Enjoy!

The old comp wall has been stripped and some new problems have been set. There's not much to get on yet, and what there is, it's brick hard. The rest of the wall will be set later on in the week so there should be more to play on by the weekend. 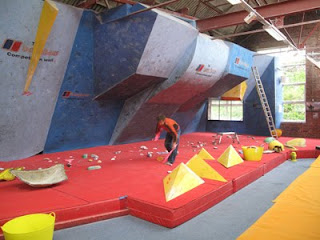 The remains of the old wall... 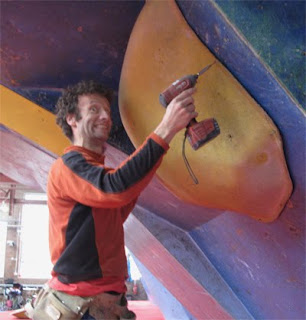 ...and the start of the new one

At the start of July, Cliffhanger returns to Sheffield and this year it will be hosting a round of the Bouldering World Cup. It will attract the best of the World's boulderers and will be an amazing event to watch. As part of The Climbing Works support for this event, the wall will be the isolation zone for the competitors before the qualifiers and finals. What this means is that we will unfortunately be shut to the public allday on Saturday July 3rd. We will reopen on Sunday at 2pm. You can read more on the website>>

On Thursday the UK will have the 2010 general election taking place. It also sees local council elections occur in many districts. This is your chance to have your say on how you would like your local council and country run.

We at The Climbing Works would like to encourage everyone who has a vote to use it. We don't care (within reason) who you vote for but we would like you to walk to your local polling station and use your democratic choice.

If you're not sure who to vote for then you can read more about the parties and local MPs on the BBC election website. If you feel that no-one represents what you believe in then spoil your ballot. Don't sit at home and do nothing.

Not sure how to cast your vote on the day? The BBC once again have an easy to follow guide>>

We are very lucky in the U.K. to have a chance to change our country by voting. It's a once in five years (usually) choice and you have between 7am-10pm on Thursday to cast it & make your voice heard.