END_OF_DOCUMENT_TOKEN_TO_BE_REPLACED

Saturday is going to be a big day for everyone involved in The Climbing Works. Usually, after a big day of work, you go home and have a cup of tea. You do this because you're tired, it's relaxing and you need the rest.


Not here. On Saturday night we'll be going from The Climbing Works to Club Culture to dance till the very early hours of Sunday morning. We're throwing an after party to let our hair down and generally let off some steam. The venue is the same as the Christmas party - Club Culture in Sheffield City centre - and the time is 11pm till 4am.


The party is the second part of The Climbing Works triathlon - the CWIF, the party and then climbing on Sunday. The winner of the Works triathlon will be announced on Monday. The judging criteria for the triathlon will be made up as we go along. Decision is by Climbing Work cheeses and will be final (not open to bribery either, ok yes it is). Prize will be satisfaction of beating everybody else. Anyone caught cheating will be embarrassed in public. 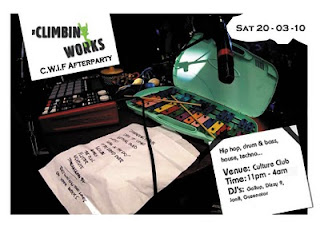