END_OF_DOCUMENT_TOKEN_TO_BE_REPLACED

Sam has finished the green spotty circuit which is made up of 20 slightly longer than normal problems. Nothing harder than 6a on the individual problems themselves but the new green spotty circuit is 'mountain style' meaning you can link alot of the problems together. They'll all be explained on the topo but you'll have route length problems up to F7a+. Nice.

CWIF update:
All 180 places for the CWIF have now been filled. If you really want to compete on the day we're open to plea's via email but they better be good ones : ) info@climbingworks.com

Remember that the the 180 places are just for competitors on the qualifying CWIF circuit. We are open as normal so you can come and climb the other circuits on the day, just not the yellow qualifying circuit.

If you're not climbing or competing you can still come and watch the semi & finals, eat at the FREE BBQ and generally get psyched watching some of the world's best boulderers crush.
We'll also have our FREE after party at Club Culture which is in Sheffield City Centre. This is on from 10pm - 3am

Comp Wall: To get ready for the CWIF, the comp wall will get stripped on Tuesday morning meaning you only have till Monday night to get your projects finished. 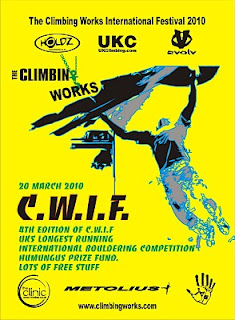