END_OF_DOCUMENT_TOKEN_TO_BE_REPLACED

We're very happy to announce that big Ron will be giving a lecture in The Climbing Works on Sunday 7th March.

Ron Fawcett was one of the key players that transformed rock-climbing in the 1970s. His first new climb, Mulatto Wall at Malham Cove, was completed when he was just 15 and came in at the weighty grade of E3. From there he went on to push the grade of climbing to new levels with FA's of classics like Masters Edge (E7), Strawberries (E6) and Careless Torque (E7 7a / Font 8a).

A true living legend, Ron is also one of the nicest people you'll ever meet. A regular to The Climbing Works, Ron still loves to climb. On bad weather days he spend hours ticking away at our coloured circuits and when the sun does shine, you'll find him on the gritstone doing his own circuits. 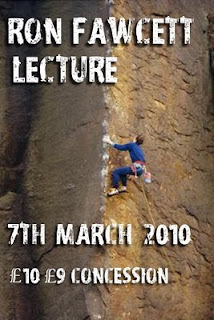 This is his only confirmed lecture in the UK to promote his new autobiography (from the same people who gave you Jerry Moffatt) and it should be a great night full of stories. You can buy tickets on the website or at reception.

At the moment, we have not confirmed whether he will be showcasing some of his more famous lycra leggings....but you never know.