END_OF_DOCUMENT_TOKEN_TO_BE_REPLACED

Friday 4th Dec saw the 2nd round of The Climbing Works Winter Bouldering League. After the 1st round which saw a lot of tops on the cash prize, it was no surprise that this months was a little harder. 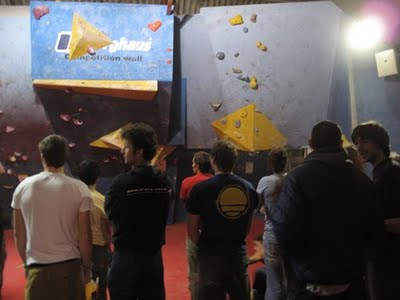 The 2 cash problems can just be seen here - the yellow volumes on the left hand side was the mens, while the girls also went through here using the red holds also

The night overall saw around 70 competitors take part. 25 problems right through the grade range with a very special slab problem with some new beastmaker 'metal' holds.

So the cash prize problems. Ned 'beastmaker' Feehally got warmed up and then got straight onto the cash problem. After about 8 goes, including a few falls from the final moves, he finally latched the top hold. The problem saw off everyone else meaning Ned headed off to Newcastle (for a weekend of British Bouldering Team training) with £125 in his back pocket.

Meanwhile over on the Women's problem a similar tale was unfolding. After a few attempts from different women, only one remained - Katy Whittaker. Slowly but surely, each attempt got her higher and refined her beta on the problem. She got to the final moves a number of times only to be denied right at the finish. Time and energy were running low so emergency sugar reserves were called upon (red powerade) and after a bit of a rest she stuck the final moves to earn herself a Saturday shopping trip in Sheffield to the tune of £125.

We'll have a video of round 2 within the next few weeks, while round 3 will take place on Friday Jan 15th 2010. 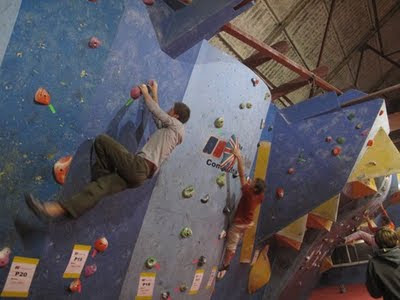