END_OF_DOCUMENT_TOKEN_TO_BE_REPLACED

A certain Sheffield resident, ex-climber (who's middle name is Charles), wall & hotel owner came to visit another business located beside us, leaving his car in a No Parking zone. This left us with no choice but to 'redecorate' his car... 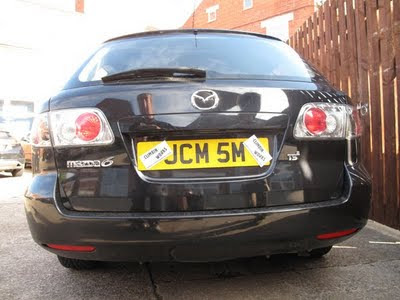 who could do such a dastardly deed?? 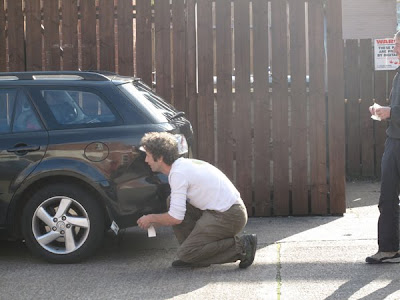 Today we got a visit from Leo, managing to catch up with him a little about the Asgard Project, hearing some of the tales from the trip. From even this short chat, it was clear that it was a pretty intense experience! From skydiving onto the glacier (sse trailer below) not sure if the landing zone was packed snow or a weak snow bridge, to suffering frostbite on the actual wall, there's a ton of stories.

You can read an excellent article by Ed Douglas on the expedition online at the Daily Mail website. Well worth a read.

You can hear all these and see footage of the upcoming film at his lecture on Sunday 1st November. Tickets are available online or at reception.

Another reason Leo was in today was because of an interview with a Japanese magazine. So if you're in Tokyo anytime soon, you may see him on the front cover of this mag... 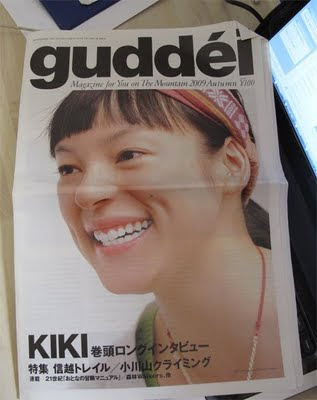 The Black Circuit has now been taken down, with the holds now clean (thanks to benky grip wash), Percy will start setting on Thursday and should be finished by Friday. You should have a lovely new 40 problem Font 6a circuit. Percy having just returned from Fontainebleau, you can expect some proper, scientific, grading....

After the success of the Reel Rock Tour on Sunday night, the next show at The Climbing Works will be the Leo Houlding lecture that will happen on Sunday 1st Nov. This should be a brilliant night as Leo has just returned from Baffin Island and Mt Asgard. The premiere of The Asgard Project film will be at the Kendal Mountain Film Festival in mid November but you can get an early preview of the stories and exploits of this stunning expedition.

Yesterday I managed to get out for an early morning mid-week circuit session at Stanage Plantation. Clambering around in the beautiful morning sunshine reminded me of why I live in Sheffield and why I enjoy being part of The Climbing Works (we don't open till midday).

We're at that magical point in the year in Sheffield when both the grit and limestone are 'in'. The grit is starting to feel the stick that cold mornings bring, while the limestone is dry and in perfect nick with ideal sending temps for summer projects. It's a perfect time of t-shirt weather to send and down jacket on for spotting.

It's also a time for trips abroad. The Works is a bit short staffed at the moment due to Percy being in Fontainebleau (with the Ginger Ninja, aka Jacky Godoffe) and Sam, Lu & Michelle in Albarracin, Spain. Both these wonderful bouldering destinations are coming into perfect season. All of this reminded me of this short, web only, flick from last year made by BigUp Productions. It is called, funnily enough, 'Tis the season and is all about this time of year.

As I watch the drizzle and grey cloud settle over Sheffield, I thought I'd share this film to keep your psyche levels high. It also enable's you to waste a few minutes at work on a Wednesday afternoon and get those all important motivational levels high for an evening session in the Works.

If this gets you psyched, make sure to come down and watch the Reel Rock Tour on Sunday 18th Oct at The Climbing Works. It will feature Progression, the latest from BigUp Productions, and will be a UK premiÃ¨re as the film hasn't yet reached these shores. The first part will be a collection of short films including sections of First Ascent: The Series which will show on National Geographic in the new year. Part of this will show Alex Honnold soloing Moonlight Buttress in Zion which was a groundbreaking ascent last year.

Autumn is the pristine time for Grit and Limestone routes, cold crisp dry days means you can choose your rock type and project in the knowledge that it's going to be good.

Progression is the new one from BigUp productions (Dosage series) and will feature in this Sunday's Reel Rock Tour at The Climbing Works. The DVD will be out shortly afterwards.

First out this season is Grit Flick, the new DVD from Posing Productions. As the name suggests this film is all about the Grit - routes mostly (scary runout classics and also esoteric brutal cracks) but with a bit of highball bouldering thrown into the mix. There's some great footage on this and it's a lot of credit to Alastair Lee and his team that they are out at the right time (usually in cold windy weather) to shoot it.

Grit Flick is broken up into mini-films, a bit like Hard XS, so you can watch the film in one long section or just watch the shorts individually. Highlights for me was Ryan Pasquill on the last big line at Ilkley. The climbing footage is fantastic but its the conversation between Ryan and John Dunne that really steals the show - hilarious! Also up there is Jordan Buys long days at Widdop wall and Ben Bransby highballing a magnificent new 'problem' at Rhylstone. There's alot of footage on this DVD and at only Â£13 it's an absolute bargain!!!

If you like climbing films, this is definitely one for the collection. If you're really into your Gritstone routes then this is an absolute must-buy.

As the title might suggest, I have finished another circuit. This time it was the turn of the red holds to get a re-vamp, so there are now 40 new problems graded between Font 6b and 7a+ for you all to enjoy. Last weeks white circuit has proved to be very popular, so thats a total of 87 new problem set in the last 8 days.....and now I'm off to France for a weeks holiday!

The new 47 problem white circuit topo is now available from the website. Please print off your own copy and keep it with you as you tick the problems. It also helps in finding them all as they are randomly located around the center.

Yes, the new white circuit is done. 47 problems starting easy and then getting slowly harder and harder - number 1 is about Font 4, whereas number 47 is "7b+" (see the comp wall for an explanation of what the Bishton grade of "7b+" is all about)! We are going to provide a topo and a tick list for this circuit for anybody who is interested in recording their progress. At the start of December when the circuit will be taken down again you can hand in your tick list and get entry into our free prize draw - the first 5 out of the hat get a prize (we don't know what yet, but it will be nice, promise!) Ask at our reception desk for a topo and more info. At some point we will pop some more info on here and a downloadable topo so you can print out your own instead of having to run the gauntlet of whether we will have any left when you visit. I think the circuit has a very broad church of styles and difficulty, so there should be something for everybody. Good luck!

As mentioned last week, legend of manliness Big Pickles is back from Mount Asgard. For those of you inquisitive as to what Jase was doing out there with Leo, Stanley, et al, the Mail on Sunday has printed a six page spread on the expedition which you can find HERE. Its a slightly more enlightening read than the previous cuttings from the Todmorden News I posted!

We've got a new shoe offer at The Climbing Works this week.

The classic Boreal Crux's are now ONLY £55 (RRP £75). The Crux has been in the Boreal range for a while and is a great shoe for those looking for a more technical shoe without the down turned toe. The Crux is similar in last to the Anasazi velcro but is more friendly to those with slightly wider feet.

Buy instore or online at climbingworks.com 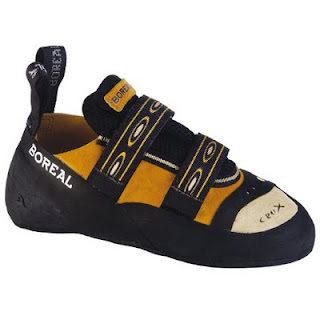 The reason for the cheaper price? We're getting some new styles in from Boreal and so we have to make some space. This is a great opportunity to grab an excellent mid-range, edging shoe for a superb price.