END_OF_DOCUMENT_TOKEN_TO_BE_REPLACED

Yesterday The Climbing Works held its first ever Young Climbers Festival. It was an end of summer event for all the children who participate in our regular children's sessions or holiday courses over the past year.

The morning started off with the instructors running fun games to get the children warmed up and motivated. The main part of the day was a friendly competition on the new orange circuit set especially for the day by Michelle and Sam. 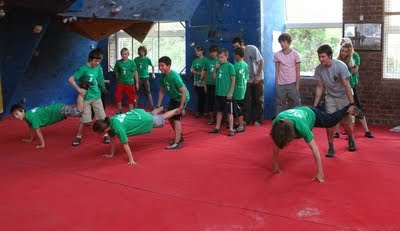 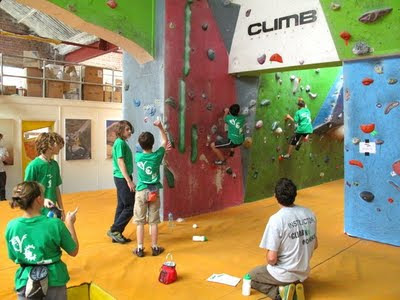 Each competitor had 10 problems to climb which had been selected from the circuit according to age and ability. Points were awarded for the lowest number of attempts taken to complete the problem. Prizes were given out for scores but also for most dramatic fall, encouragement given and best attempt. The whole event was very easy-going and non-competitive, giving the kids a fun day. 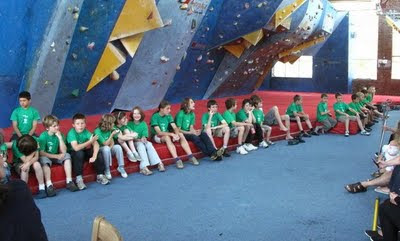 The event was a great success with over 30 young climbers taking part and positive feed back from both the competitors and parents who were already asking when we are holding the next festival. If you think you're kids would be keen on climbing / partaking in a climbing festival, make sure to keep an eye on www.climbingworks.com/events and our blog for the latest information.

A big thank you to all the instructors who helped out on the day. 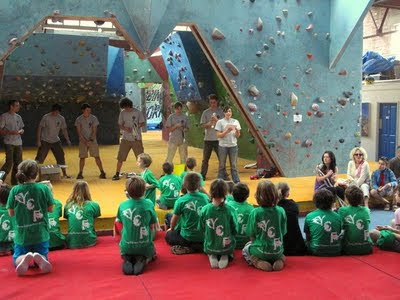 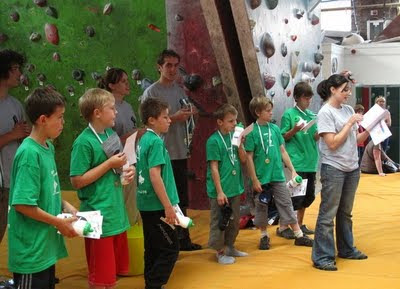 The tired but happy kids with their prizes and certificates

With the nights drawing in and a bit of a chill in the air it's time to start thinking about the oncoming Winter season. As always we're going to have our Bouldering League with 25 new problems on the Berghaus Competition Wall.

All the info on the competitions is on the website here but the basic dates are:

The Percy special problem has had a bit of a tweak this year. Instead of one problem with a cash prize, this year there will be two - one male & one female.

But wait, there's more. The cash prize has increased to Â£250 for each round! That's Â£1000 up for grabs available over 4 rounds.

A unique idea that will undoubtedly not be copied by anyone else in the UK......

If that hasn't got you psyched. Check out this video of last year's Berghaus Bouldering League to find out what it's all about:

In early July, Cliffhanger once again took place in Sheffield Millhouses park. A stunning success, it featured numerous sports and activities that drew a huge crowd on both the Saturday and Sunday.

One of the biggest draws was the senior British Bouldering Championships that took place on the Sunday with both Men's and Women's finals coming down to the last problem. It was an absolute brilliant competition and drew a large crowd that produced a electric atmosphere.

If you weren't there, you now have a chance to see it on Sky TV in September as for the first year Cliffhanger had TV camera's there to record the whole event. The climbing will be one of the main focus events in the programme with commentary from the legend Jerry Moffatt. It's on a number of different channels at different times so catch it live or record it.

You can watch a teaser trailer for the programme below:

A very Blue week this week. There is a new Blue circuit (grades 2+ to 4) that has been set today and has already had a good hammering this afternoon thanks to the showery weather. Also, we're all feeling a bit blue 'cos our favourite wall manager, Brian has been a poorly boy this week. Apparently he has got a nasty virus that has made him feel a little bit rubbish all week, so get well soon, Brian! (We're sure that Matt's stag do at Sankeys last weekend had nothing to do with it, Bri!)

With another visitor to these shores (this time a 15 year old Japanese kid) ripping up the grit...in August, I thought it be good to recall the work done by Team America on the grit last year. 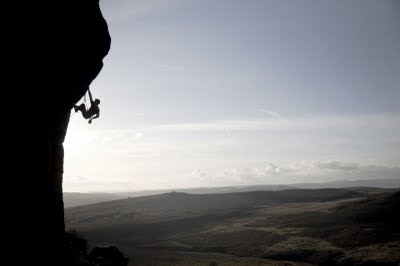 When Matt, Kevin and Alex were over they brought a video camera with them. Finally Kevin has got around to editing some of the footage for Black Diamond's new website, accompanied by a grit article from Alex. It's a good read and a video well worth viewing...even just for Kevin's Gaia fall - ouch!

As it's the weekend, we thought we'd give you something to watch to make those last few hours of work disappear a little quicker.

The video is an interview with 3 of the top Spanish lead climbers who discuss their training. An interesting viewing for those who think they train alot....

We first started our free adult improver sessions last winter. First, it was only on a Wednesday night, then we added Friday, then we had to kick out some of the regulars who were just getting too good for the group we were aiming at. Well, now we're starting a regular fortnightly advanced adult improver course to help take you to that next level.

This will not affect the normal adult improver sessions that we run every Wednesday night. The advanced one is for those who have either moved on from the original sessions, or for those who are operating in the Font 6a-6c grade range (black, purple spotty circuits). It's aimed at those people who want to improver their technique and skills, get help with current projects or want to meet people who climb at similar grades. It's all done in a fun atmosphere and will undoubtedly get you crushing!!

Both the normal adult impover and the advanced sessions are free and require no pre-booking. Just be at the wall by 7.30pm and wait for the announcement.

Dave Mason will be the regular coach for the advanced sessions.

***For those who don't know about the normal adult improver sessions, read on. They happen every Wednesday & Friday night. They're aimed at those completely new to climbing operating in the Font 4-6a mark. All you need to bring is a willingness to learn and you will be well on your way to becoming a better climber.

The sessions last 1.5 hours, they're free (just your normal entry cost) and are a great way to meet people climbing similar grades, making bouldering that little bit more fun. We've had people go from complete beginners to climbing Font 6a in 6 to 7 months so the classes definitely work.

The new yellow circuit has been added to today with about a dozen new problems added to the current yellows. The grade is in around 7a to nails so they should give you some 'pleasure' in working out them before the rest of the circuit goes up next week. 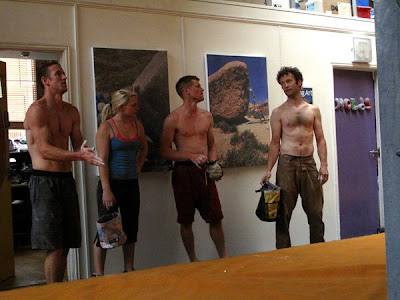 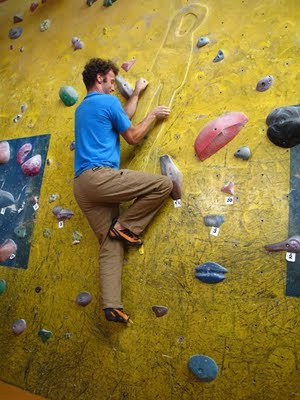 Percy warming up in his usual style....by getting straight on the hard problems. 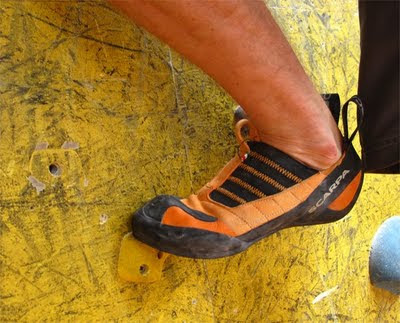 The new Scarpa slipper due out early 2010. Sam & Percy are putting them through their paces and so far, they're getting good reviews. 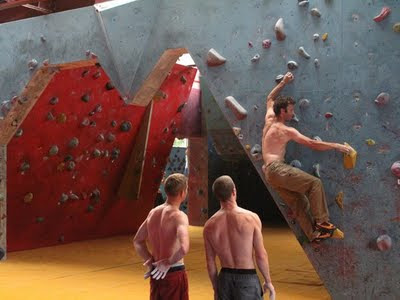 Percy in action on one of the new yellows

For all those Competition wall afficiondos, the new Berghaus Comp Wall topo is now online to download on the Website. 30 problems from Font 4 to 7c.

As it's a weekend, we thought we'd give you something interesting to watch. As you may know, Leo Houlding is on Baffin Island at the moment trying to do some ridiculous speed climb / base jump shenanigans. You can read all about the asgard project on the official website and see alot of very good videos on Leo's own website. Enjoy!

The new Purple spotty circuit is done - 34 problems from Font 6b to 7a to test all of your bouldering skills. Enjoy!