END_OF_DOCUMENT_TOKEN_TO_BE_REPLACED

What a weekend!!! As you may have read from Percy's last blog, the CWIF was almighty success with around 200 competitors and a finals that was one of the best ever held in the U.K.

We've spent the last 2 days doing some cleaning and maintenance which has resulted in some new problems on the comp wall to go alongside the Men & Women's final set. There's a few from the semi's on there plus a few new ones too.

As for the CWIF itself. Well, we're all recovering slowly from it after a weeks prep, a mad day in itself and 2 days getting refocused. A huge thank you to everyone who showed up, competitors and spectators. I'm currently going through all the photos so expect a gallery on the website in the next few days. We also got some amazing video footage which is being cut and edited as I write. That should be up in the next few weeks.

We'll also write up a bit more of a report on the whole day this week so to give you some of the flavour and inside stories etc...

As for the scores, again, they're currently being entered and they will be on the website by tomorrow afternoon.

In the meantime enjoy the few random photos from the day below...

Dave Barrans on the skip problem, one of the yellow qualifying circuit problems that ended a few dreams

Jerome Meyer (part of Team Beastmaker) being very french. Jerome won the competition by the smallest of margins. 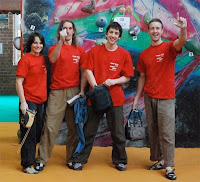 Maud showing her skills on the yellow qualifying circuit 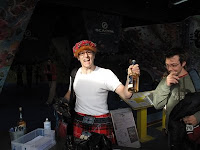 A competitor on the Male #2 semi-finals problem 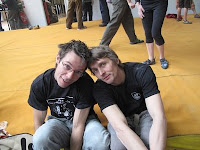 Gaz Parry & Andy Earl showing what happens after many years of competiting....they could do a bit in their day.