END_OF_DOCUMENT_TOKEN_TO_BE_REPLACED

So with one day to go to the mighty CWIF, the finals and the semi finals have been set and the boys are currently working on the new yellow qualifying circuit. 30 problems from 5 to 7b+ or so. These problems are on the walls but you CANNOT climb them till Saturday, even if you have no plans to compete. 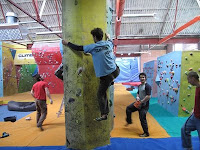 Percy testing one off Longy's creations on the new yellow circuit

The semi final problems are on the comp wall but they will not be revealed till just before the semi's at 3'ish. You can see the full timetable for the day below. Remember there will be a free BBQ and a free Niall Grimes lecture/stand-up also on during the day. 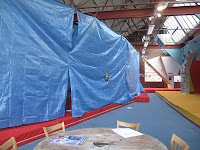 The Comp wall hidden away under our amazingly technical and high spec...tarp. 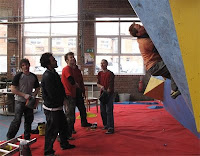 The lads testing one of the problems for the finals on the comp wall.

If for some strange reason Gaz Parry manages to win anything, Graeme has been counting out his winnings. It's custom for us to pay Gaz in 1 & 2p's...

Timetable for the day

0800 Doors open for registration and warm up

1815 The One and Only Mr Niall Grimes

As we've mentioned before we've got some of the best routesetters in Britain for the comp (Percy, Longy, Pickles and Cassidy) but we've also got our very own, very French, Jacky Godoffe and Tonde Katiyo setting. Percy took them out onto the grit on their first day to sample the delights of the stanage circuit. 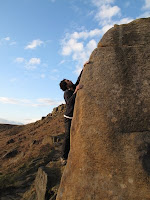 So good, Tonde did it twice! 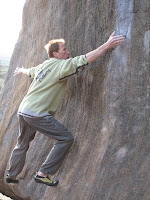 Jacky on Deliverance. I won't say how he found it...