END_OF_DOCUMENT_TOKEN_TO_BE_REPLACED

This is your big chance, everybody! Tonights the night. For one night only, and as part of the SHAFF weekend, the main man of British rock climbing, Ron Fawcett, will be giving a lecture.

So what, I hear you say?

Well, there are a couple of reasons why this is a lecture you shouldn't miss....

Firstly, Big Ron is a legend of climbing and has more fantastic/hillarious/terrifying anecdotes than any other climber you will ever hear

Secondly, Ron hasn't done a lecture in years, and is very rarely coaxed into the world of public speaking, so this is a very rare chance to see and hear the big fella

Thirdly, its BIG RON, for goodness sake. For my money you can keep your Sharma's and your Graham's - this is the real deal. A man who pushed climbing standards for years, has probably done more climbing than the rest of the SHAFF speakers put together, and the most genuine and friendly guy you could ever want to meet. And rumour has it, his hands are even bigger than mine! Forget sitting in front of your telly tonight - get yourself along to The Showroom in Sheffield and witness Ron in action.

Some of you might have noticed that the "volumes" wall in the Works doesn't currently have any volumes (or any holds) on it at the moment. Don't panic though, the volumes are all away for a refurb in anticipation of the CWIF next weekend, so prepare for new volume madness next week when we reset. 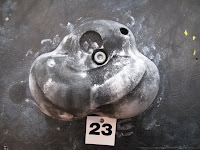 Today Percy & I have set a new black circuit of 41 problems around the Font 6a mark. Some are low in the grade and some are 'stiff' for the 6a tick.

With every new circuit we're going to try and give you some video beta for one of the problems through our youtube page. First up is problem 41. As this is first one, no editing or special effects. 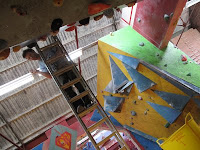 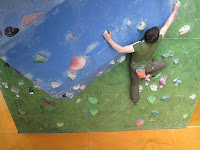 The new circuit was set using new holds from Core Climbing who are based in Chesterfield. With the CWIF coming up we asked them to do us something special and the boys have managed it so look out for the 'special' hold on the day.

There is an updated page on the website now with more details on the CWIF. Make sure to read to know about times etc for registration.

Next week we will be getting the new delivery of Moon clothing for Spring Summer 2009. In anticipation of this, and to raise your general climbing psyche levels, check out the videos below of Moon athlete Tyler Landman. He's currently in Font and tearing it up, ticking Font 8b's in very short time.


Ty Landman - Khéops 8b from ben pritchard on Vimeo.

..to get our breath back and have a bit of a 'relax moment'.

The last couple of weeks have been incredibly busy in here and coming up at the start of March there's another couple of very busy weeks, with both the CWIF and the BUCS happening on consecutive weekends. This weekend we're going to have a bit of time for ourselves and actually do some of this climbing malarkey.

Meanwhile back at the ranch, the new 45 motherboard is now pretty much set and finished and has been getting some pretty good reviews from the hardcore few.

We aim to please everyone here which is why today Sam has headed back to the training board and done some tweaks to the circuits on there. Down has come the salmon 6c circuit and up has gone 2 new circuits, one at 6c'ish and one at around 'tricky 7b'. This won't affect the stand alone up problems while at the same time filling a hole in the circuits. You now have a 6c, 7a+, 7b, 7c, 8a, 8a+ & a 8c to keep the stamina and power endurance climbers smiling.

You can all make up you're own punchlines to that question! In this case I'm referring to the new green spotty circuit that Sam and I have set this morning. It replaces the old "Mountain" circuit where you could link all the problems together to make one super-long traverse. The new circuit is around the same difficulty as before (Font 5 to 6a) but the individual problems are longer than normal so you can work stamina as well as power. When I say longer, I really mean it - the entire circuit only has 15 problems, but we have run out of wall for any more! Enjoy.

This year saw the first Sheffield Walls Bouldering League with the last round being held at The Climbing Works on Friday 13th Feb.

The overall and male category winner was Roy Moseley who won by a measly 2 points over 4 rounds! Winner of the female was our own Leah Crane (also winner of the Berghaus Bouldering League 2009) while the junior categories were won by Nathan Philips & Natasha Milinkovic
The overall results can be read in pdf format here>>
The winners each receive a year's roaming membership to the four climbing walls (the Foundry, Edge, the Matrix and The Climbing Works) with the 1st senior male / female also receiving £50 cash courtesy of The Clinic. 2nd place also receives a 3 month roaming membership plus £50 cash while 3rd receives a 1 month roaming membership.
All the winners can pick up their prizes from Graeme at The Climbing Works.
Thanks to The Clinic for supporting the first annual Sheffield Walls Bouldering League

Continuing on from last week, today has seen the Beastmaker boys back in to set on the new 45. Not only do we have the 'Ned' in, but also the 'Dan'. What this means is the continution of the setting of the new very steep (45 degrees in fact - just in case you weren't sure what the 45 stood for) wall. 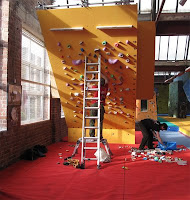 Going on to the wall are some very small holds, for hands and feet, all from Dan's &  Ned's own wall. We will have a book on the go with problems identified and graded so for those who want to test themselves. 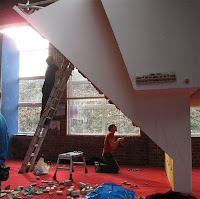 On the other side of the 45 Sam & Percy have been extending the campus board rungs with Sam doing a bit of maintenance on the older rungs. 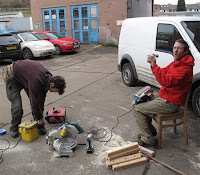 You can now read the overall results from The Climbing Works Berghaus Bouldering League on our website.

In just under 3 weeks time (Saturday 7th March) we will be hosting our annual Climbing Works International Festival, aka the C.W.I.F.

Andy Earl in the Semi's in 2008. Photo Alex Messenger

This will be its 3rd year, with this promising to be the biggest and best yet. You can read the whole format on our website but in summary its a very unique competition that you won't find anywhere else.

Why so unique? Well for starters, you can spend the first part of the day climbing alongside some of the best climbers in the world, testing yourself on the same problems that they are climbing. There's also a team element with a prize of £500 for top team. If you don't think your team is in for a chance to win, simply make it a fun competition with a mini-comp between you and your mates.

If you have one of those 'special days' you may even reach the Semi's which will be held on the Berghaus competition wall. If you're not at the relevant world-class level you can instead just kick back and enjoy the free BBQ, free lecture and view some of the best climbers batter themselves in the semi's and grand final.

It will be a fantastic day and we are going all out to make it something special. Read about how the day works and all the different parts to the day on our website. You can also watch the CWIF 08 video below to get a better understanding of how the day unfolds. Put the date in your diary and make sure to come down and have a fantastic day.