END_OF_DOCUMENT_TOKEN_TO_BE_REPLACED

Work is moving on with the new Moon Board in the Works. Here's a picture of the wall so far - there is still a fair bit of work to do, but it should be ready to climb on within the next two weeks. 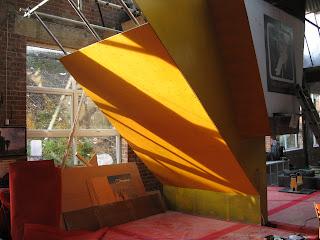 The campus board is back in action, although the pipe rungs will be replaced before too much longer with some big rounded wooden rungs instead. The pull up bar is out of action for a bit as there is a gap in the matting underneath it, but a new and improved pull-up bar is in the pipeline too!

Well, its been a busy day at The Works. I have installed the 45 degree board - well the basic structure is in, but it'll be a bit longer before its open. We'll have to wait for new matting, a swanky paint-job, lots of new holds, a bit more woodwork, a safety grid to cover the nearby window, a refurb to the campus board and a load of tidying up. Should be another week or so I reckon.

Whilse I was banging away in DIY corner, channel 4 were in filming a friend of mine who has been chosen to appear on Come Dine with Me (one of Sam's favourite TV programmes!). I hope they will dub some suitable music over my building noise!

When I get a moment tomorrow I'll take some pictures and post them on here so you get a better idea of the new bits of wall we've created. But now I'm off for a lie down....!

OK - here's a short weekend update on what has been a manic week of work. Firstly, you may notice when you come into the Works that we are in the process of fencing off the storage area above our offices with some super heavy-duty railings - to quote our Environmental Health Officer, "You can't put a price on safety!"
He's not wrong!

There is a new Yellow/purple spots circuit that we set yesterday - the grade is Font 4 - 5, and the emphasis is on a wide selection of styles of problems that you have to think about, and that will encourage the use of new techniques. This is the circuit that we use for our improvers coaching as many of the problems introduce the concepts of more 'advanced' climbing techniques (eg: palming, egyptians, heel and toehooking, precise footwork, etc,etc...) What this means in reality is that its a great circuit to help people progress and learn new skills, and its also a brilliant warm-up circuit for the more experienced boulderers. I'm sure the circuit is set to get a right hammering in the next month or two!

Finally, I'll come clean about the worst-kept secret at The Works. On Monday I'll start work building the new 45 degree training board - sponsored and designed by Moon Climbing. The main structure shold be finished within a day or two, and then the boys will take a few days to finish it off - new matting, position the holds, etc, etc. Word is that Ben Moon will be taking a big part in the set-up of the board, and will be setting the problems on here.

I hope that this new addition will fill the obvious last gap we still had in our climbing provision. It certainly should see the training monsters getting even stronger - now there's a scary thought. Watch this space for updates!

For those who haven't seen the posters or seen the website then this is going to make you happy.

On Sunday 8th Feb, Jerry Moffatt will be giving a lecture at The Climbing Works to help publicize his book Revelations which is due out around this date.

For those who know who Jerry Moffatt is, then you've either got tickets or are currently planning on getting some. For those who don't....read on

Jerry was undoubtedly one of the most talented climbers ever to come from these shores and in the late 1980's and early 90's he was probably the best climber in the world. He also wasn't very modest in telling everyone this and Jerry's famous lines are now legendary "there are only 3 people in the world who could hang those holds - Me, myself & I".

His lectures were always sold out affairs and were always brilliant nights. This will be another one and probably one of the last chances as Jerry doesn't do too many lectures these days.

We've got 200 tickets available and 1/4 of them have already gone. This will sell out so get your tickets bought early to avoid disappointment. You can purchase them online at our website and also preorder a signed copy of his book Revelations.

It's going to be a cracker of a night so make sure you don't miss out!

The new bits of wall are all reset and have been seeing a good amount of traffic, so its time for a new circuit. This time the Yellow/Purple spots circuit is due for a re-vamp, so it will be taken down tomorrow and reset on Friday just in time for what looks like being a wet weekend! That will be a total of 110 new problems set in the last week (from last Friday to this Friday). Who says we don't change routes very often?!
Tomorrow will also see a large consignment of steel, scafolding and wood arriving. I wonder what that could be for? Wait and see!!!! 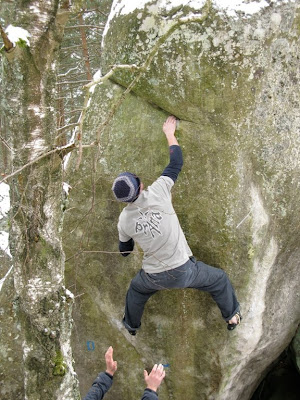 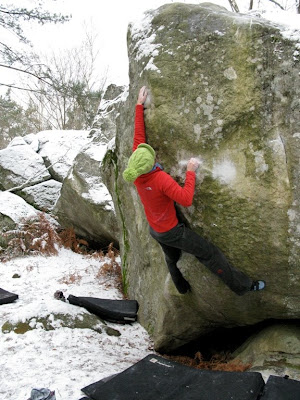 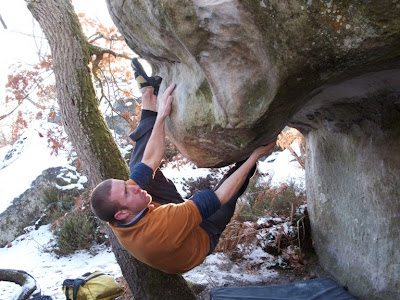 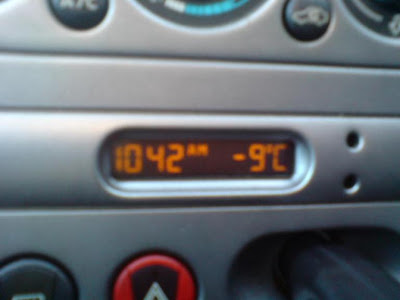 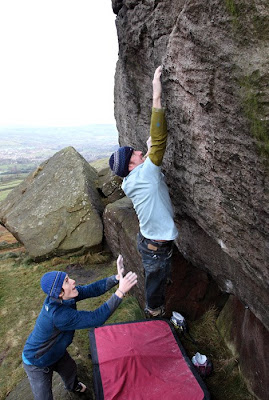 After spending a week in the magical forest of Fontainebleau, I remembered some of the early board ( in the Pub ) meetings with Percy and Graeme. Most of our inspiration and ideas were based the boulders of Font and it was great to be back there in almost perfect conditions and feel as psyched as ever for Climbing. Lucinda and I spent a week with some Australian friends of ours in a really nice Gite just nr Buthiers, we climbed six days out of seven and felt completely destroyed by the end. check out my scarpa blog for some more photos and stories.

The Font trip has made me as keen as ever and managed another one of my projects on wednesday. I was out with James and Dave and we were very lucky to find some dry rock at Earl cragin Yorkshire. We quickly warmed up and realised that Underworld 7c+ was dry. James did it 3rd go and despathed it on about my 6th go atfer falling off the last move and feeling robbed!!
Keep up the training and psyche...Cheers Sam

The results of Friday's Berghaus Bouldering League R3 is now available on the website. You can also read Percy's blog from SaturdayÂ for the fight for the credit crush £50.

Round 4 will be held on Friday 13th February and it will also be the last round of the Sheffield Walls Bouldering League so expect some quality problems and another cracking night. 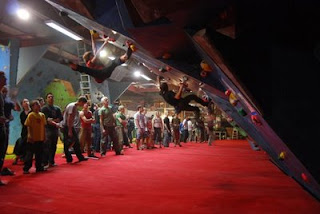 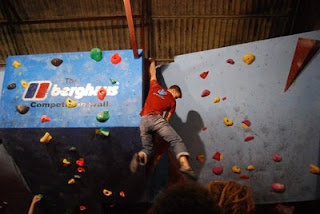 Dave Barrans topping out Problem 2, narrowly missing out on the £50 cash prize as Ryan had topped out problem 1 just a few seconds before

All the rest of the circuit walls are now open and have been fully reset, almost 40 problems in total so nearly a new circuit. 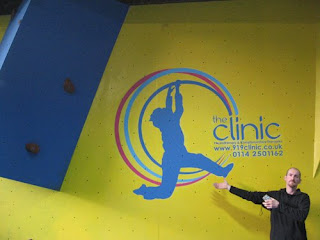 Al very happy with his artwork

Finally, have a picture of Poppy (Percy's dog) wearing our new logo'd OR down jackets. She seemed happy enough and so do our staff who wear them the rest of the time 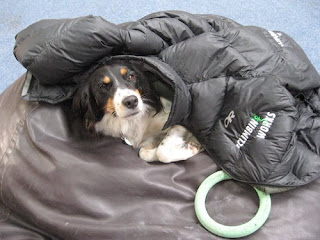 Well, last nights bouldering competition went stormingly well with a very big turn out of climbers taking part. The results should be up on here at the start of next week. There were a lot of very talented boulderers who came to try their luck at winning the cash prize for my now mythical "special" problems. However, due to the credit crunch(?), this month I decided that rather than just climbing one problem, the cash would go to the first climber to complete 2 of my special creations. This is probably more due to the fact that I ended up with two volumes-only problems that were just too good for me to pickone that was worth the cash, so I decided to make the competitors work a bit harder and do both for the prize!
Anyway, vying for the money were the likes of Ryan Pasquil, Dave Barrans, Ned Feehally and Climbing Works own resident mutant, Nacho! In the end it came down to a matter of speed to decide the prize! Dave Barrans fought to the top of problem one, whilst Ryan looked on having already bagged the second problem. As Dave tried to recover from his exertions, Ryan stepped onto to problem 1 and looked like scooping the cash. However, due to a load of egging on from the crowd, Dave suddenly realised that if he jumped onto the second problem and dispatched it before Ryan had finished the technical problem one, the money would be his! The scene as both guys fought their way up the problems simultaneously was amazing - both problems worth at least 7b+ or harder and monsterously physical. In the end Ryan just managed to hit the finish hold of his problem less than 10 seconds before Dave finshed his bloc, so Ryan scooped the cash but it was a fantastic bit of climbing to watch - like a bouldering duel!

Roll on the final competition of the season, which will take place on Friday 13th February - unlucky for some?!?!

The Clinic wall is now nearly ready to the reset - the sign-writing and re-painting has taken a bit of time, but it should all be back in action by Monday evening. The other new bits of wall have been set and are being very well recieved, so come on down and try them out...

Tonight sees Round 3 of the the Berghaus Bouldering League. As usual it starts at 7pm and finsihes at 10pm. Scorecards cost Â£2 plus your usual entrance fee.

Tonight we have a special £100 cash prize but to get it you have to climb 2 problems, both of which start in the same place. Its another mad volume journey... x 2. Check out the picture of Sam starting the problem(s). 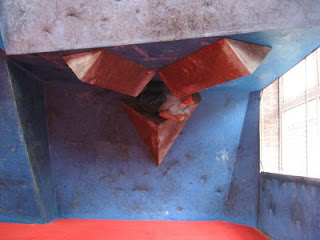 Sam getting into position to go either left or right...both Font 7b+

Also today we've had Al Williams in re-doing the logo of the Clinic on the back wall. This should be done by tonight and reset on Monday. The other new wall is being reset today. 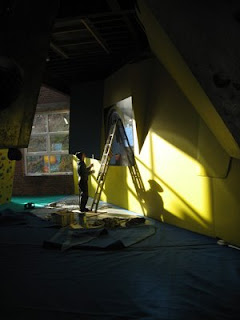 Finally, our front desk computer has finally gone 'bang!' For 2 and a bit years it has done a great job but the final straw that broke the camels back was a cup of tea from a certain member of staff that will remain nameless. Katy.

As you can see below, how the computer lasted this long is a surprise considering the amount of dust in it. 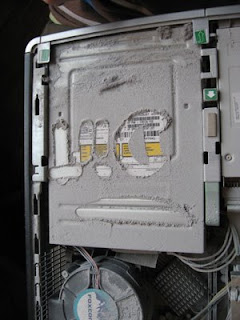 So within 3 days we've built 2 huge new volumes on 2 parts of the circuits walls and created a new part to the old slab on the comp wall. These have all now been painted and are currently drying meaning the next stage is just about here, setting. 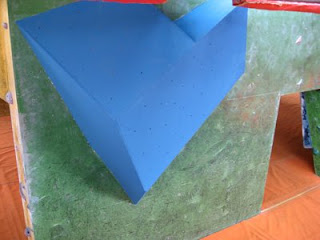 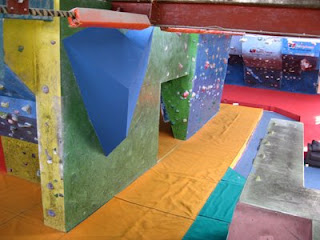 2 views of the new 'volume' on the wall opposite the kids boulder.

Thursday will see both the competition wall stripped and some new problems go up on the new walls / volumes so by this weekend you should have 25 new comp problems and about 10-15 new problems on the circuits walls. Not bad for a week's work. 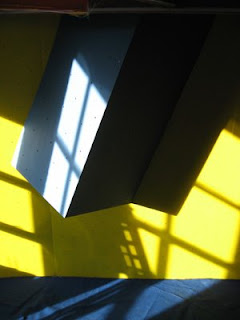 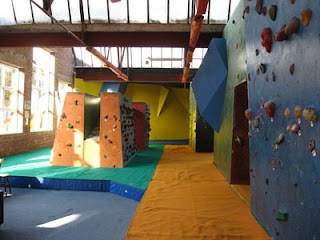 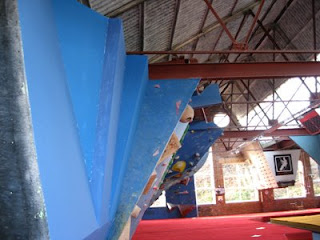 The new wall on the old slab part of the comp wall. Now no longer a slab, well 1/2 of it anyway.