END_OF_DOCUMENT_TOKEN_TO_BE_REPLACED

Yesterday Sam and Team America (Kevin Joregeson, Alex Honnold & Matt Segal - otherwise known as the Mexican, Monk and the Midget) headed back out onto the grit to take advantage of the one day weather window to get some routes done.

Since Team America arrived 3 weeks ago they've had a frustrating time. Decent weather lead to quick leads of grit classics including Ulysses, New Statesman, Balance It Is and Parthian Shot but the last 2 weeks have seen a lot of rain and not much climbing. In the meantime the boys have been watching alot of movies, they're now into 40+ with the most impressive day being a redpoint watch of The Bourne series with a quick despatch of Supremacy and Ultimatum back to back. 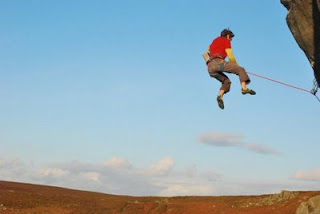 Yesterday shone bright and with everyman and his dog seemingly at Stanage bouldering (does anyone work anymore in Sheffield??) the team headed to the slightly quieter spot of Curbar.
Last week Alex flashed End Of The Affair (E8) but the rain came in that day before Kevin and Matt could send so yesterday the boys quickly ticked that (as did Britain's manliest man) with Alex then ticking Knockin On Heavens Door (or a slight variation of it but still E8).

After a bit of Air Ambulance action due to another climber injuring themselves the team then headed to Black Rocks where Alex proceeded to onsight Gaia (E8). Gaia has never had an onsight before so it was impressive stuff, even more impressive in that he did it in just over 3 minutes!!

You can read a more detailed report on the Climb website >>