END_OF_DOCUMENT_TOKEN_TO_BE_REPLACED

As next week is half-term for school kids in Sheffield we are putting on two special kid club sessions on Tuesday & Wednesday (28th & 29th Oct).

If you're looking to book just call reception and ask about availability.

Yep, its that time of year again where I have to leave the security of my nice big bouldering wall and head off to work for the IFSC for one of the big international competitions. This time I'm off to set the final round of the bouldering World Cup which will be held on 31st October to the 2nd of November in Moscow. Apparently, there is a common belief amongst many that the life of an IFSC chief routesetter is all fun and glamourous stuff (admitedly the job I had to do in the Reunion islands last year was pretty cushy), but I have a funny feeling that this time things may be slightly less relaxed - no sunny beaches, warm sea, big surf and sun-bathing this time! Lets just hope its not too cold! The last job I need to do before I go is to sort out the dates of this winters Climbing Works bouldering league competitions. Stay tuned for an announcement on the website in the next day or so.

As always, Sam and I decided to continue todays board meeting in a slightly more stimulating environment to our office, so we headed off to Stanage to meet up with Big Pickles and a crew of American climbers over for a 6 week trip sampling the delights of the grit. As ever, none of these visitors were punters, as the photos below show! 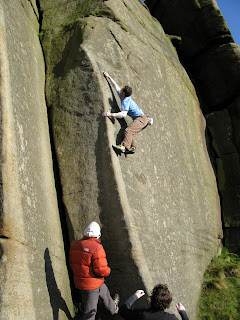 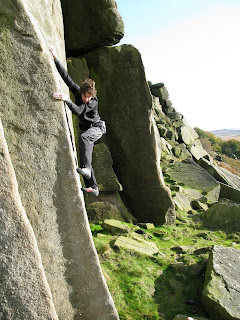 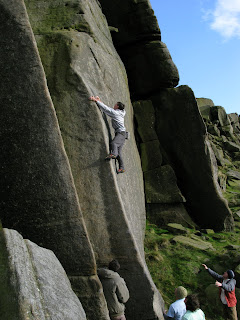 All the photos show various peoples attempts on the Stanage classic E6, Ulysees.

Top is Big Pickles establishing his high point, middle is Dave Graham deciding to come down, and bottom is Alex Honnold flashing the route! Unfortunately (luckily?!?!) a rain shower than put paid to Jason and Dave stepping up for another go. Phew! Before you all go wondering how some randon American dude could just step up and flash a classic scary route like Ulysees, be warned that Alex has considerable previous form, including a solo ascent of Moonlight Butress in Zion, USA. After 1200 foot E6 solos these short grit routes should be a breeze! Click on the photos for a bigger view.

Many of you mentioned the absence of our easy green circuit last night... Well, don't panic. Sam has been hard at work this morning and a new green circuit is under construction. There are currently about 15 problems, with the rest of the circuit to be set tomorrow (providing Sam pulls his finger out and gets cracking!)
Meanwhile, I have added another 3 problems to the end of the spotty circuit that I set last week to bring the problem tally up to a nice round 40 (this should please all the climbers who thought they'd ticked this circuit - back you go!)
Finally, I have added some more hardish problems to the comp wall - not for any other reason than that I have to go to Russia next week to set the final round of the Bouldering World Cup, and its always good to get your eye in! I might add even more before the end of the week. The grades for the new stuff isn't on the topos yet, but they are all in the 7a to 7b+ range. You'll have to try and work out which ones are the hard ones. Enjoy...

As you might have deduced from the title, the latest range of clothing from E9 has just arrived in our shop, and there is some great looking stuff to keep you warm this winter. Best be quick though - if last year is anything to go by, it should sell out pretty quickly!

....all over the walls! Yes, I finished the new spotty circuit on Tuesday, and its been causing mayhem ever since. The grade spread is Font 6b to 7a (although there are a couple of steadier ones in there too, just to give you a break). At the moment there are 37 problems to go at - I'll add the last 3 next week (just when you think you've got it wired)!

In The Climbing Works we have a pretty simple employment rule, potential employee's must be psyched to climb. The level doesn't really matter, it's more the attitude.

In the last week both Leah Crane and Mina Wudji-Wudji have made the 3rd & 4th female ascent of Ben's Roof (7c+/v10) at Raven Tor. Both succeeded on it after working it over a few weeks, showing amazing determination and grit (the problem involves a very painful kneebar rest that thrashes your skin) to get it in the bag. All in all a fantastic achievement that we are all super proud of here : )
Both Mina & Leah are members of the British Bouldering Team who are heading off to Paris next week to compete.

Other female ascentionists of Ben's Roof are Lucy Creamer & Siobhan Coughlan. Siobhan is also an ex-employee of the Works....must be something in the water here...or maybe it's the 10,00osq ft of bouldering. 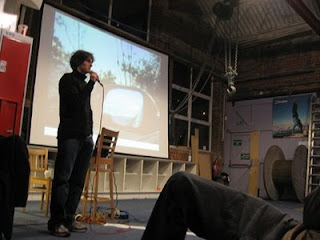 On Sunday night we started off our Winter lecture series with the wad that is Dave Graham. For those who were here, they enjoyed a man who was on top form even though he was still jetlagged and had just driven 5 hours from London after a lecture and a Masterclass. 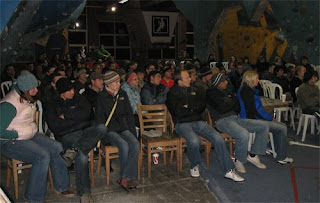 The 100+ crowd thoroughly engrossed in the talk
If you get a chance to hear him talk as he makes his way around the country don't miss out as it's an excellent lecture that will certainly get you motivated to push yourself harder. 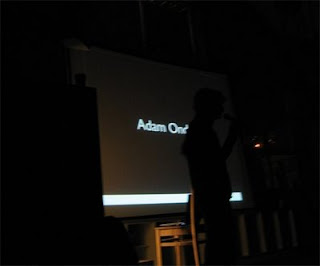 Dave talked about the future of climbing with the young Adam Ondra being a fine example of where climbing could go.
Dave is in Sheffield for a couple of days and has been out on Stanage (in variable conditions) and is just about recovered from his jetlag. With the sun shining and a cold wind blowing he's off down to southern peak with Mr Bishton, Whittaker and Pickles for a tour today. Could be interesting...

After our initial gamble of building a really large scale bouldering-only climbing wall, it was only a matter of time before other like-minded climbers saw the potential and tried to build their own bouldering centres. So 2 years on 3 groups of people are now ready to open their own versions of our original concept.

Firstly, Andy Earl, Darren Stephenson and Chris Graham have nearly finished their project, Climb Newcastle, based in Byker, Newcastle upon Tyne. Based in the old swimming baths in Byker, this wall looks like being an absolute cracker (and built by the main man Andy Long who was responsible for the walls in The Climbing Works!). Perfect for stopping off at when you get rained off in the County!

Secondly, my good friends based in Eindhoven, Holland have finally (after a load of beaurocratic problems which have dragged on for the last 18 months) finished their dream bouldering centre. I know Holland isn't on the list of places to visit for most UK based climbers, but there is no shortage of Dutch boulderers to take advantage of this amazing looking venue. Big congratulations to Dirk, Remco, and the rest of the Monk team. Click on the link to check it out.

Last up is The Climbing Academy, Paul Twomey and Rich Emerson's bouldering centre in Bristol which should be opening its doors to a massively excited local climbing scene in the next month or so.

They say that imitation is the sincerest form of flattery, and we are really pleased that these guys have seen what we've done and have been motivated to try their own versions and ideas of our concept. If you happen to be in the North East, the South West, or even in the flat-lands on Holland, I can highly recommend that you check these new centres out!

Meanwhile, back on planet Climbing Works we have just taken delivery of a huge load of new holds courtesy of the nice people at Bleaustone which will be used to create a new circuit at the start of next week. The new circuit will replace the current purple one, so you have one more weekend to sort out any unfinished business!

This Sunday, 5th October, Dave Graham will be visiting The Climbing Works and giving a lecture. It should be a cracker as Dave is one of the strongest climbers out there and has been for nearly the last decade.

Dave Graham is pretty much a phenomenon/mutant/natural. Since starting climbing in his home area of New England he has continuously pushed the boundaries of sport climbing and bouldering. He's climbed F9a+, bouldered numerous 8b's, 8b+'s 8c and is well known for his stout grading (he's downgraded a number of hard problems after quick repeats). He's travelled all over the world and currently calls Switzerland home.

Tickets available now at The Climbing Works front desk or on 0114 250 9990. Ticket price is £10 / £8 concession. On the night itself the doors will open at 8pm with the lecture starting at 8.30pm. Drinks, food & raffle also available.