END_OF_DOCUMENT_TOKEN_TO_BE_REPLACED

Thanks to everyone who competed & spectated at the Rab CWIF 2019!

We'd also like to thank all of our event sponsors for their continued support:

Be sure to check out our media partner UKClimbing's coverage on the Rab CWIF here:

If you want to check out the results for the qualifications here.

The Semi-Final & Final live streams can be re-watched below or on our YouTube Page, but if you'd rather just see the results they can be found here.

Now that the dust has settled and we are mostly(!) back to normal, we now have full results for the Rab CWIF 2018.  Scroll a little lower if you want to catch replays of the live streams from Technative below.  Team results will follow on Wednesday.

Thanks to everyone who came down to compete, those who spectated here or online, and a huge thanks to our sponsors Rab, Scarpa, Squadra, Axis, Bleaustone, Blocz, Lapis, UKClimbing & XCult for your continued support!

Head over to our media sponsor UKClimbing for their lowdown on the Rab CWIF 2018 Finals!

Our Media Partner UKClimbing have some excellent write ups for The Rab CWIF 2017 on their site, so check out these links for articles on different aspects of the weekend:

If you just want to jump straight in & check out the livestreams from the Finals or Semi-Finals you can find those below!

Check out the qualification results for the Rab CWIF 2017 here:

Watch the below three films shot by Nick Brown for BMC TV over The Rab CWIF weekend. They showcase the exciting talents of Molly Thompson Smith, Jim Pope and of course Shauna Coxsey.

Shauna Coxsey at the Rab CWIF 2016

An incredible weekend was finished off by an amazing Final which had some incredible moments. Grab a seat, a beer and get ready to watch some amazing competition climbing.

Want to watch the whole competition again? Scroll below or go to our YouTube page - links below:

What. A. Move! On the buzzer, last go, Oh my god! The crowd went wild for this and it's easy to see why as it is one of the most crazy moves you will see in any competition. Rustam pulled it out of the bag and secured 2nd place at The Rab CWIF 2016

Rustam Gelmanov: The Rab CWIF Final 2016 from The Climbing Works on Vimeo.

The only finalist to figure this problem out, it was a contortionists dream as Sean twisted and moved through this Men Problem 3. The crowd went wild as he finally broke through the crux and headed towards the top. Sean's reaction says it all at the end

Sean McColl: The Rab CWIF 2016 from The Climbing Works on Vimeo.

Shauna Coxsey delivered an imperious performance during The Rab CWIF Final showing why she is one of the World's best competition climbers. Here is she crushing problem #4 in the Final, the only lady to top this very tricky problem

Shauna Coxsey: The Rab CWIF Final 2016 from The Climbing Works on Vimeo.

Rewatch the whole of the grand Final below. The first 50 mins is a highlights package of everything that went on the day before at The Rab CWIF Qualifiers (Sat 12th March):

Rewatch the whole Semi-Finals below:

The above Top 20 from Male & Female after all 3 qualifying rounds Saturday 13th March went through to the Semi-Finals of The Rab CWIF.

For The 10th CWIF we went bigger and better and this year we had our first 'CWIF Social Hub'. This was a massive room that had many of our sponsors offering great one-off deals to those who come down to compete / watch The Rab CWIF. The room had a chill-out area, Cafeology Cafe, BMC Bar (in collaboration with Thornbridge brewery) and a ShAFF TV - showing classic adventure films - throughout the weekend.

We couldn't make The CWIF happen without support from these great brands:

Big thanks to Norman Gilman at http://www.gilmangraphics.co.uk/ for creating such amazing CAC Glasses for the Winners.

THE CWIF 2015 WAS AN AMAZING WEEKEND. Thank you to everyone for coming and watching online. You can read up on the whole event below and re live it through the highlights film below or watch it all again on the IFSC YouTube page.

WATCH THE CWIF 2015 HIGHLIGHTS FILM BELOW

The CWIF 2015: Highlights from The Climbing Works on Vimeo.

You can read a full report up on our website of The CWIF 2015 which has links to photos, films and gives you an insight and overview of the planning behind the festival.

You can also find out more on Twitter #CWIF @climbingworks

You can also view a great selection of photos from the weekend from Dom Worrall at our Google+ page here.

View the full results from qualifiers right through to the Finals in the links below.

View photos from The CWIF Finals on our Google+ page. All photos by Dom Worrall

View photos from The CWIF Semi-Finals on our Google+ page. All photos by Dom Worrall.

The Qualifying results can be found here>>

View some great photos (again by Dom Worrall) on our Google+ page here.

Re-watch the live stream of the CWIF Finals that took place on Sunday at 1800 GMT below. Make sure not to miss out on the 'different' awards ceremony at the end.

On Saturday 7th March we welcomed 350 competitors from all over the UK, Europe and the World as they came to compete at The CWIF.

Watch what the qualifying circuit is all about on this short film below:

The CWIF 2015: from The Climbing Works on Vimeo.

Want to get a taster of what The CWIF is all about? Watch the highlights film from The CWIF 2014 below:

The CWIF 2014 - Highlights Film from The Climbing Works on Vimeo.

A fantastic event with 350 entrants representing over a dozen nationalities. The CWIF 2014 registration open & closed within 2 days! It was an unbelievable response for us and showed just how big, and fun, The CWIF has become. We had a full crowd for both the Semi's & Finals of the event and we're already thinking of how we can improve it for 2015.

In the Women's CWIF Final, Shauna Coxsey retained her title for a 3rd year just beating Mina Markovic on the final problem. In the Men's CWIF we had a new champion with Tito Calyeron displaying awesome power and technique to flash all four problems.

You can read a detailed report, with photos, of the whole weekend on our blog>>

View a whole raft of photos from Dom Worrall on our Google pages below:

You can also see plenty of photos on Instagram.com/climbingworks #thecwif including some behind the scenes shots

Watch Shauna Coxsey retain her CWIF 2014 title in this short film below:

The CWIF 2014: Shauna Coxsey short from The Climbing Works on Vimeo.

The CWIF 2014: Tito Calyeron short from The Climbing Works on Vimeo.

YOU CAN WATCH THE REPLAY OF THE FINALS IN HD BELOW

REPLAY OF SEMI-FINALS BELOW

WATCH THE CWIF 2014 PREVIEW BELOW:

The CWIF 2014 Preview from The Climbing Works on Vimeo.

Find out more about the weekend itself on our blog>>

The CWIF 2014 is supported by Scarpa, Adidas, Berghaus, Axis holds & Volx holds. Official media partner is UKClimbing.com. Without these companies The CWIF just wouldn't be as much fun!

Held on the weekend of the 2nd & 3rd March 2013 The 7th Climbing Works International Festival was the biggest CWIF we've ever held. The best way to get a taste of what the CWIF is and why it is so special is to view the highlights film below.

CWIF 2013: Highlights Film from The Climbing Works on Vimeo .

Below are the results from the final of the CWIF 2013: 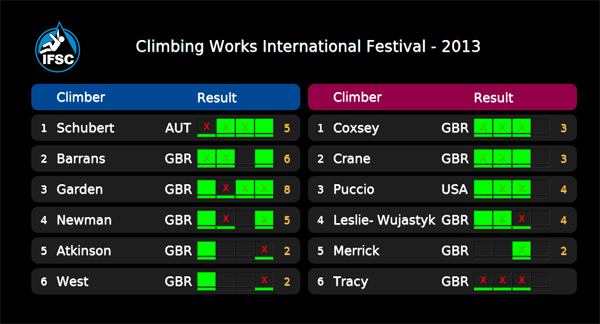 You can also watch The CWIF 2013 champions, Jakob Schubert & Shauna Coxsey, send each of their final problems in the short films below:

You can also re-watch the Finals & Semis on the IFSC Youtube below:

You can view the results on the IFSC Website also. Mens here>> and Womens here>>

Qualification results from the Saturday are available here>>

The CWIF 2012: Highlights film from The Climbing Works on Vimeo .

This was its  7th year and as always we went bigger and better than ever before. The basic structure was the same as in previous years with an open qualifying event (over 2 sessions - One in the morning & one in the afternoon) on a brand new circuit on the Saturday 2nd March. These started off easy (Font 5+/6a) and went up to very hard (Font 7c'ish). This circuit was used to whittle down the 300 or so competitors to the 20 Men & Women who will took part in the Semi-Finals on the Sunday morning. The top 6 went through to compete in the Grand Final which will take place early Sunday evening.

This year our chosen charity for The CWIF was Climbers Against Cancer . Over the weekend we managed to raise over £6k for this great charity.

Keep reading below for reports from previous years, films, photos and all the information you will need to get the most out of The CWIF.

The CWIF 2013 is sponsored by Adidas Outdoor , Berghaus , Scarpa , Outdoor Research , Axis Holds & Volx Holds . Without their support, The CWIF would be no where near as much fun.

The CWIF 2012 was a massive success and we would like to thank everyone who came to compete, watch, help out and generally have a great weekend. We raised over £3,000 for Macmillian Cancer Support & Edale Mountain Rescue Team over the 2 days so a massive thank you to the routesetters who donated their fees and the public for donating so generously. A big thank you also to Scarpa & Berghaus for generously giving so many prizes for raffles and giveaways.

READ ALL ABOUT IT :

We have a number of articles that you can view to get an idea about what it was like to compete, spectate and be involved in the 2012 CWIF.

The Climbing Works own  full report on the CWIF 2012>>

A UKClimbing.com article on the CWIF & ShAFF weekend in Sheffield>>

You can also watch the highlights film & trailers for CWIF 2012 below:

The CWIF 2012 was supported by  Scarpa , Berghaus ,  UKClimbing.com , King Kong Climbing and  Holdz . These companies help make The CWIF what it is. Without this support, The CWIF would not be as much fun.

Want to know more about The CWIF and what's it all about? Why it's regarded as the best competition held in the U.K.? Watch the quick montage from 2011 and then the extended highlights film from the weekend:

If you want some more motivation then have a look at a great selection of photos from the event on our Picasa Page . There's a great album from Alex Messenger to view and a superb selection of shots from Dom Worall from the finals.  There's also a 2011 CWIF report you can read here>>

You can relive the past years through the photo slideshow below (all photos Alex Messenger).